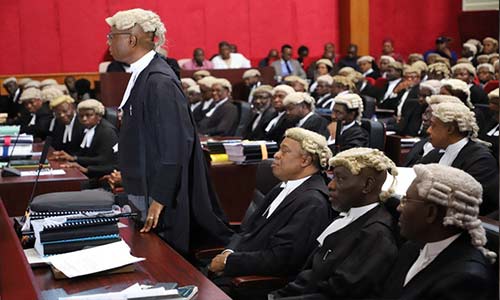 The proceedings of the Presidential Election Petition Tribunal in Abuja were cut short on Friday after the Peoples Democratic Party and its presidential candidate in the February 23, 2019 poll, Atiku Abubakar, said their other witnesses scheduled to testify had been attacked.

Atiku and PDP, who are, by their petition, challenging the victory of President Muhammadu Buhari and the All Progressives Congress at the poll, spoke through their lawyers who informed the tribunal that the witnesses were waylaid by “gunmen” on their way to Abuja from Zamfara State.

The petitioners had called eight witnesses on Friday, making 36 witnesses presented so far by the petitioners, and the tribunal was to go on its routine one-hour break at about 1pm, when one of the petitioners’ senior lawyers, Chris Uche (SAN), broke the news.

He informed the five-man tribunal led by Justice Mohammed Garba that the witnesses said to have been attacked were those they prepared for the second half of Friday’s proceedings.

He said, “I am not sure if the next set of witnesses would be available.

“We got information that they were waylaid by armed men while on their way from Zamfara State to Abuja.”

The lead counsel for the petitioners, Dr. Livy Uzoukwu (SAN), who walked into the courtroom while Uche was addressing the bench, also corroborated the claim.

He said, “I was the one that was called on the phone. I kept having the repeated calls and had to go out to answer.

“I was told that while the witnesses were on their way from Zamfara State, they were attacked by armed men.

“Some of them jumped into the bush and some of them were gravely injured.

“Up till now, they are still looking for some of them in the bush.”

He, therefore, noted that there would be no need for the sitting to resume at the end of the one-hour break.

The number of persons involved in the incident and the exact location of the attack were not given by the lawyers.

He requested that the matter be adjourned till Monday.

The lawyers representing the respondents to the petition — the Independent National Electoral Commission, with its legal team led by Yunus Usman (SAN); President Muhammadu Buhari, whose legal team was led by Yusuf Ali (SAN); and the APC, whose team was led by Latef Fagbemi (SAN), did not oppose the request for adjournment.

Buhari’s lawyer, Ali, specifically expressed sympathy with the petitioners’ side.

Zamfara is one of the 11 states where the petitioners are ‎challenging the outcome of the February 23 poll.

2. Dr. Livy Uzoukwu, the lead counsel for the PDP and Atiku/Obi at the Tribunal informed the court that the witnesses were attacked on their way from their various destinations as they were coming to the court to testify against the fraud in the last February 23, 2019 elections

3. In view of the above information, the Trial Judge, Justice Mohammed Garba has adjourned hearing on the @OfficialPDPNig and @atiku/@PeterObi’s Petition to Monday, the 15th of July 2019.