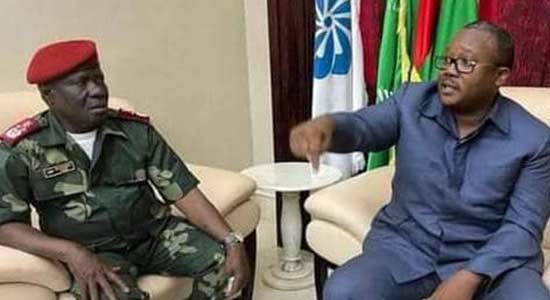 Guinea-Bissau’s President Umaro Sissoco Embaló said an attempted military coup to overthrow him had failed on Tuesday, and called for calm across the country during a national address broadcast on Radio TV Bantaba.

“I have never imagined that we would arrive to this type of situation,” Embaló said. “I never thought that Bissau-Guineans could practice another act of violence.”

Defense forces engaged in crossfire with the alleged perpetrators for five hours before averting the coup, Embaló said.

He added that “many” members of security forces were killed in the failed attempt, but did not confirm the number of casualties. Several arrests have also been made, the president said.

Embaló also said that he believes the perpetrators of the coup intended to kill him and members of his cabinet, who were gathered for a weekly meeting in the palace. He added that drug traffickers and corrupt agents were also involved in the “very well planned” coup attempt.

“Power is something you get from the people — through ballots,” Embaló said, adding: “Guinea-Bissau is mourning today.”

Earlier in the day, the Economic Community of West African States (ECOWAS) called for peace in Guinea-Bissau, as gunfire was heard around the government palace in the capital Bissau.

The unrest in Guinea-Bissau came after a military coup rocked Burkina Faso on January 24.

Prior to Embaló’s address, Mamadou Jao, an academic in Guinea Bissau, told CNN that the streets were quiet across the capital, as worried residents stayed inside awaiting more information.

“Bissau is quiet but we don’t know what is happening near the government place… We are waiting to know more about what is happening,” Jao said earlier on Tuesday. Jao added that the power was off in homes saying: “The place is in darkness for about three or four hours. It is not something that happens normally.”

David Glovsky, assistant professor in Africana Studies at the University of Albany, told CNN that since taking office in early 2020, Embaló “has faced many challenges to his legitimacy, including disputes over his election itself.”

“I doubt many Guineans are surprised by another coup attempt, and yet this is still so disappointing,” Glovsky said, adding: “Regardless of anyone’s feelings on President Embaló — and there is a real range — Guineans have too often been at the mercy of the military, and elite conflicts that do not necessarily focus on the concerns of Guineans across the country.”

Guinea-Bissau’s history has been marked by several military coups since the country gained independence from Portugal in 1974.

These conflicts have ravaged the country’s infrastructure and economy, leaving it among the poorest in the world.