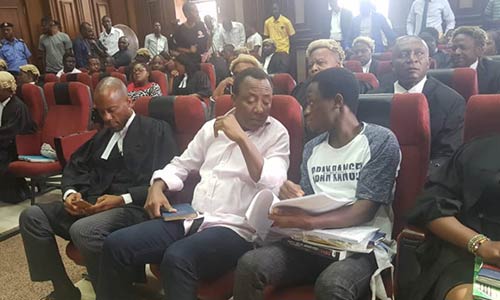 Sahara Reporters publisher, Omoyele Sowore, and his co-detainee, Adebayo Bakare, on Tuesday, described the Federal Government’s application for their transfer from the custody of the Department of State Service to prison as frivolous, vexatious and unarguable.

They said the fresh application filed by the government before Justice Ijeoma Ojukwu of the Federal High Court in Abuja was meant to frustrate the court’s order for their release from DSS custody.

They also described the application filed on behalf of the Federal Government by the prosecuting counsel, Hassan Liman (SAN), as contemptuous for being a contravention of the order directing the DSS to release them from custody.

This is contained in their notice of preliminary objection filed before the court to challenge the Federal Government’s fresh application.

Sowore and Bakare are being prosecuted before the court by the Federal Government on charges of treasonable felony instituted against them in the wake of their call for #RevolutionNow protests across the country to demand better governance.

The DSS continues to hold them in custody since August when they were arrested, despite separate court orders directing their release from custody.

The latest of the court orders was the one issued by Justice Ojukwu on meeting the bail conditions imposed on them after their arraignment.

They argued, through their legal team led by Mr. Femi Falana (SAN), that the application for their transfer from the DSS custody to prison, showed that there was no genuine interest to prosecute them.

Grounds of the application read, “The application was filed by the Complainant/Applicant to frustrate the execution of the order of release of the 1st and 2nd defendants/objectors from the custody of the State Security Service made by this Honourable Court on November 6, 2019.

“There is no genuine intention to prosecute the 1st and 2nd defendants by the complainant/applicant as the statement of witnesses this Honourable Court ordered to be availed the defence team is yet to be issued and served.

“The grounds upon which the complainant’s/applicant’s application is hinged are frivolous, vexatious, contemptuous, manifestly unarguable and unknown to law.”