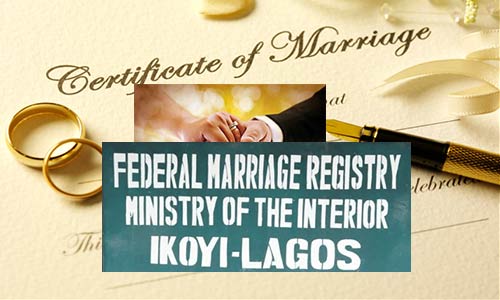 The Federal Government, through the Ministry of Interior, re-emphasised its position that it was the only tier of government permitted by the constitution to regulate and conduct marriages.

In an advertorial titled, ‘Public notice on conduct of statutory marriage’, in a newspaper on Wednesday, the Interior Ministry said, “The attention of the Ministry of Interior has been drawn to the publication in the PUNCH Newspaper of Friday, 13th September, 2019, page 42 under the caption, ‘Marriage: Ignore FG’s directive, LGs tell organisations’.

“The Ministry of Interior is therefore constrained to issue this notice in order to properly guide the public on the issue of Statutory Marriages under the applicable law in Nigeria.”

The public notice added, “It is observed that the local governments have deliberately misinterpreted powers conferred on them by item 7 (1) of the Fourth Schedule of the constitution.

The ministry, however, warned that any statutory marriage conducted in breach of the Marriage Act, CAP 218, Laws of the Federation 2004 would not serve the desired purpose.