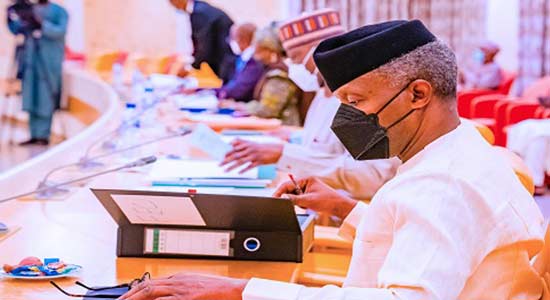 The Federal Executive Council (FEC) has approved the right to 14-day paternity leave for federal civil servants to allow them bond with their infants.

This was disclosed to State House Correspondents on Wednesday by the Head of Service of the Federation, Dr Folasade Yemi-Esan, after the week’s virtual FEC meeting presided by Vice President Yemi Osinbajo at the Presidential Villa, Abuja.

Dr Yemi-Esan explained that the paternity leave initiative is one of the introductions to the newly reviewed Public Service Rules (PSR), which was just approved by FEC, which she said was revised last in 2008.

Speaking on the need for the paternity leave to be an item in the revised PSR, Chief Civil Servant said this is to enable for proper bonding between the father and a new born babies, especially at the early stages of the child’s life.

Dr Yemi -Esan further explained that fathers of adopted babies of less than four months will also enjoy this gesture.

“We’ve also been able to ensure that leave now is calculated based on working days, not on calendar days, that also has been approved.

“We also have introduced the transition from paper service to a digital service. So, these are some of the new things that are in the new PSR that has just been approved by the federal executive council,” she explained.

Explaining more on the paternity leave and those qualified to benefit from it, the Head of Civil Service of the Federation said: “paternity leave is the leave that is approved for men, when their spouses or wives have given birth to a newborn baby, or if the husband and wife have just adopted a baby of less than four months, then the man is entitled to paternity leave of about 14 days.

“So, that is what has been approved for men so that the men and their babies also can bond well together. It’s important because we want the young children and the youth really to bond properly with their fathers, just as they bond well with their mothers.