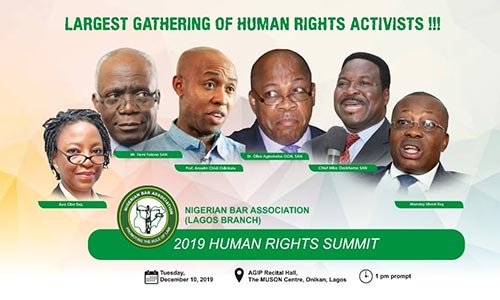 Leading human rights activists are set for a face-off with the top brass of Directorate of State Security (DSS) and Nigerian Police at the 2019 “Human Rights Summit” in Lagos.

According to a statement by Messrs Okey Ilofulunwa and Emeka Nwadioke, Chairman of the Nigerian Bar Association (NBA), Lagos Branch Human Rights Committee and “Human Rights Summit 2019 Planning Committee” respectively, the summit will hold on Tuesday, December 10, 2019 at 1 pm at the AGIP Recital Hall of MUSON Centre, Onikan, Lagos.

Among the leading lights of the human rights movement who have committed to attend the event are fiery human rights crusader, Mr. Femi Falana SAN who will chair the occasion and Prof. Anselm Chidi Odinkalu, former Chairman of National Human Rights Commission (NHRC) who is the Keynote Speaker. The theme of the summit is “Youth standing up for human rights: the case for Nigeria.”

According to the organisers, the summit which is regarded by human rights watchers as the largest gathering of human rights activists in recent times, is open to the general public at no cost. In line with this year’s theme, many university and high school students have also been invited to attend the summit.

Noting the importance of this year’s theme, the United Nations said: “After a year marked by the 30th anniversary celebrations of the Convention on the Rights of the Child, which culminated on 20 November, 2019, our plan is to capitalise on the current momentum and spotlight the leadership role of youth in collective movements as a source of inspiration for a better future.

“Under our generic call to action ‘Stand Up for Human rights,’ we aim to celebrate the potential of youth as constructive agents of change, amplify their voices, and engage a broad range of global audiences in the promotion and protection of rights. The campaign, led by the Office of the High Commissioner for Human Rights (OHCHR), is designed to encourage, galvanise, and showcase how youth all over the world stand up for rights and against racism, hate speech, bullying, discrimination, and climate change, to name a few.”