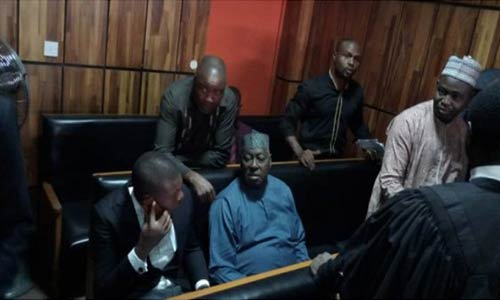 A former Secretary to the Government of the Federation, Babachir Lawal, on Thursday asked a High Court of the Federal Capital Territory to reject the evidence being given against him and five others by an operative of the Economic and Financial Crimes Commission in their ongoing trial over alleged N544m contract scam.

Lawal, through his counsel, Chief Akin Olujimi (SAN), raised the objection to the line of evidence being given before Justice Charles Agbaza by the witness, Dare Folarin, when the witness wanted to narrate what happened at the commission’s digital laboratory on an iPhone belonging to one Musa Bulani.

While asking the court to reject the line of evidence, Olujimi said what the prosecution wanted to do through Folarin was to smuggle in an evidence earlier rejected by the same court when it ruled against admitting a compact disc on the said iPhone.

Counsel for other defendants aligned themselves with the submission and that of the counsel for the third defendant, Napoleon Idelana, informing the court that EFCC had already filed an appeal against the ruling of the court on the rejection of the disc.

In his response, prosecuting counsel, Ofem Uket, urged the court to discountenance the objection raised by the defence team, saying that the evidence being given by the witness was not a hearsay as he was narrating what he and other investigators did at the EFCC laboratory on the iPhone.

After listening to arguments by the parties, Justice Agbaza adjourned till January 28, 2022 to give a ruling on the objection raised by the defendants.