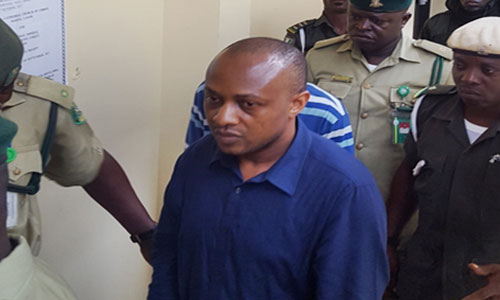 Justice Oluwatoyin Taiwo of an Ikeja Special Offences Court, has granted permission to two witnesses who do not want to appear in court to testify against kidnap kingpin, Chukwudimeme Onwuamadike, alias Evans to testify online.

The News Agency of Nigeria (NAN) reports, that Taiwo gave the approval following an application by the state prosecutor, Ms S.O Fashola that the evidence of two prosecution witnesses be heard in court via audiovisual means on Monday.

“This court is satisfied that the prosecution has given cogent reasons why Section 210 of the Evidence Act 2011and Section 200(2) of the Administration of Criminal Justice Law as amended should avail the prosecution.

“It is stated on the affidavit that the witnesses are concerned for their lives and that of their families and they now live outside the jurisdiction of the court.

“In the light of this and in the interest of justice and expedite action, I hereby grant the application as prayed.

NAN reports that Evans is standing trial alongside Victor Aduba, a dismissed soldier. They were charged with four-counts of kidnapping and unlawful possession of firearms.

Evans and the dismissed soldier were accused by the prosecution of kidnapping Mr Sylvanus Ahamonu, holding him hostage for at least nine weeks and collecting a ransom of 420,000 dollars from his family.

During the previous court proceedings on Nov. 8, a state prosecutor, Mr Yusuf Sule, had informed the court that one of the two prosecution witnesses that refused to physically testify in court was Ahamonu’s younger brother.

Sule informed the court that the witnesses would prefer to testify over the zoom meeting app and that the state will file an application on the next court date that their testimonies should be heard online.(NAN)