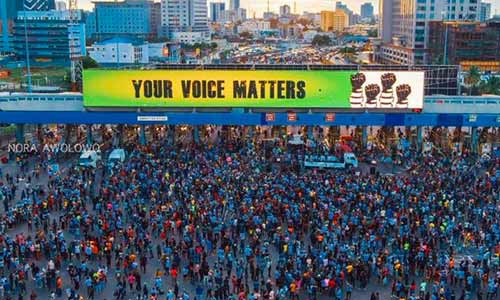 As the #EndSARS protests across the country continue, youths are insisting that their demands must be met before the protest is brought to halt.

Meanwhile, in order to aid their coordination and communication nationwide, the youths have launched an online radio, Soro Soke, TheNigeriaLawyer (TNL) learnt.

TNL reports that the online radio which is accessible vide https://s4.radio.co/s99d55c85b/listen has programmes and live reports of missing and found #EndSARS protesters were heard.

Meanwhile, when our correspondent tuned in to the online radio around 1:44PM on Sunday, music were being played on the need for their voices to count and on reforms amongst others.

“Soro Soke”, a Yoruba sentence which translates as ‘Speak Up,’ had last week become a mantra of the #EndSARS campaign after protesters in Lagos State urged Governor Babajide Sanwo-Olu to ‘soro soke’ whilst addressing the youths in the State.

TheNigeriaLawyer recalls that the protest across the country continues to gain momentum as some international celebrities and public figures have lend their voices to the demands of #EndSARS protesters on Police brutality amongst other issues.

TheNigeriaLawyer had also reported Tuesday that the Presidential Panel on the Reform of the now-disbanded Special Anti-Robbery Squad approved the five-point demands put forward by the youths protesting against the brutality and extrajudicial killings by ex-SARS operatives.