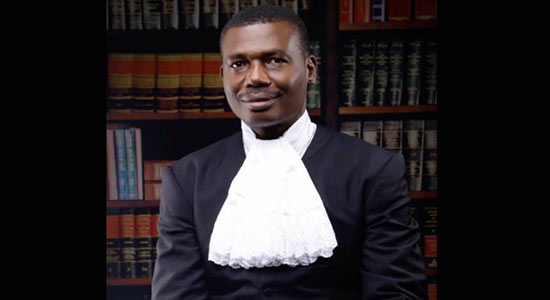 On October 19, 2020, the Governor of Lagos State inaugurated the Lagos State Judicial Panel of Inquiry on SARS Abuses and Other Related Matters, originally as a body with the mandate to probe into cases of human rights abuses, police brutality and other crimes against humanity, made by citizens against the officers and men of the Nigeria Police Force, especially the dreaded Special Anti-Robbery Squad, SARS. The day after the Panel was inaugurated, darkness hung its veil over the nation, on account of the incident that happened at the Lekki Toll Gate on October 20, 2020. There was international outrage, the nation shook like never before and a call for justice rented the atmosphere, all over the world. The terms of reference of the Panel was then extended to include a probe of the Lekki Toll Gate Incident. That proved to be a big task indeed, but Panel members were up to the task, given its composition.

There was initial controversy on the validity of the terms of reference of the Panel but upon proper dissection of the enabling law, which is the Panel of Inquiry Law of Lagos State, it was clear that the Panel was sufficiently clothed with legal mandate to proceed on its assignment. Section 1 of the said law provides as follows:

“1. Power to constitute Tribunal of Inquiry:

(1) The Governor may when necessary, constitute one or more persons by a signed instrument, a Tribunal with authority to inquire into the conduct or affairs of any officer in the public service of the State, or any officer in a local authority in the State, or of any chief, or the management of any department of the public service or of any local authority or declarations of customary law relating to selection of an Oba or a recognized Chief or any matter relating to any chieftaincy dispute, or INTO ANY MATTER IN RESPECT OF WHICH IN THE OPINION AN INQUIRY WOULD BE FOR THE PUBLIC WELFARE.”

Given the position of the courts on the famed Oputa Panel, it became imperative to be well guided. In the opinion of the State, the Panel was primarily an attempt to heal wounds, to relate with victims of human rights abuses, by the police and other law enforcement agencies, such as Vehicle Inspection Officers, LASTMA, local government tax collectors, etc and then offer compensation. The Governor had assured the Panel of a Victims Trust Fund already established with a take-off grant of N200m, from which due compensation would be paid to the victims, as determined by the Panel. This sum was exceeded and replenished as the Panel handed down its decisions in favour of victims of SARS and other related abuses.

The Panel members were sworn in at a brief ceremony at State House, Marina, on October 19, 2020 and we set to work immediately, by visiting the venue of its sittings at the Lagos State Waterways Authority office at Falomo, Ikoyi, Lagos. We indicated our disagreement with the venue for many reasons and the authorities obliged us with a change of venue to the Lagos Court of International Arbitration, LCIA, Lekki Phase 1. We requested for an independent secretariat and other facilities, in order to be truly independent of the government. Then came the Black Tuesday, at the Lekki Toll Plaza, on October 20, 2020, when darkness and sorrow engulfed the nation. There was national and international outrage on the events that happened at the Lekki Toll Plaza, especially as to different accounts from social media influencers. By Friday October 23, 2020, the Governor made a state broadcast by which he added the Lekki Toll Gate Incident to the terms of reference of the Panel. As usual, Panel members demanded for an Instrument in this regard and we were again obliged.

We then set to work, developing the rules of practice and procedure for the Panel, to interview and interact with members of the Secretariat and to conduct physical inspection of the venue for the sittings of the Panel. It became very clear to me then that the State was serious about the Panel. I received quite a number of calls, counsel and prayers, about my membership of the Panel. Why would I accept to serve a government that I had battled with in court for so many years? I did a lot of explanations. First, the cases that I filed in court were not meant to derail the government but rather to strengthen the rule of law and help the government. Second, having fought tooth and nail for democracy, good governance and the rule of law these many years, any opportunity created for engagement should not be ignored by those directly involved in the struggle to liberate our people. Or how else do we secure victory if we run away from the solution? The Governor stated to me clearly and indeed in all his public declarations on the matter that he wanted people with independent minds and who have the integrity to do a thorough job without being influenced one way or the other. Pray, how do I run away from an engagement that will lead to the compensation of victims of government brutality, most of whom are the masses of our people? What then is the essence of the struggle over the years, if we shy away from holding the government accountable for its actions and inactions?

I was myself a victim of brutality, by the police and by soldiers, by LASTMA and by other government officers, so I know what it means to be a victim. I count myself also as worthy and deserving of some compensation for the many abuses that I have suffered in the past but I drop my own personal case on this occasion in the interest of others since God has been merciful to help me survive and overcome the trauma of my ordeals. So then I accepted to serve on the Panel, given the assurances of the Governor, the commitment shown with the signed legal Instrument constituting the Panel, my letter of appointment and the other members of the Panel who all showed the desire to do a thorough job. Looking back now, I thank God that I did not shy away from this national duty. A preview of the past one year at the Panel showed to me clearly the need for activists to be involved in the business of rescuing Nigeria from the hands of predators. Many times I threatened to leave the Panel on account of certain irreconcilable differences but my Comrades and colleagues in the civil society, other Panel members and indeed my wife, would encourage me to see it through.

Yes of course Lagos State had its representatives on the Panel but by and large, the Panel established its own procedures, maintained its independence and adopted a very robust debate mechanism to decide on major issues, failing which it resorted to voting. The Panel members maintained their independence, discussed issues freely and when superior arguments were canvassed in conference, logic and sound reasoning held sway. There were occasional brick bats here and there but by and large, the Panel got round to building a consensus as a means of resolving most knotty issues.

At the commencement of the Panel’s work, I took two basic decisions and resolved to keep to them till the very end. First, I decided to make the assignment a sacrifice to the nation, for the entire duration of my service. I spoke to the Honourable Attorney-General and negotiated with him to allow me work on a part-time basis and he agreed, after consulting with the Governor and this was eventually the pattern for other members. The sitting allowance of other members was itself marginal, when compared to the work of commuting from distant locations such as Ikorodu, Ibafo, etc for some of the Panel members, but serving pro bono was very important for my own philosophy and identity. The second decision was a very hard one to take but I took it and kept to it. I decided that I would not interact with any member of the Panel outside the official sitting procedure at the venue of the Panel. I was not going to call any Panel member on phone to discuss any matter relating to the Panel privately, I was not going to send messages or entertain any message from any Panel member and I was not going to attend any private meeting with any other member on account of the subject matter before the Panel. There would be no interaction with Petitioners, with witnesses or indeed counsel appearing before the Panel. It was very difficult indeed, as such a decision was capable of being misinterpreted in our clime but I took time to explain to other Panel members and they respected my decision. Indeed, part of the joy of working with the Panel was that all the members were concerned with their integrity and they were all men and women who had put in so much selfless service, who had useful knowledge and experience in several areas and had been involved in the resolution of so many national issues.

Why would I not communicate with any Panel member at all? It became extremely difficult to build camps within the Panel for the purpose of influencing decisions one way or the other. Whatever discussions anyone may have held behind Panel members, you have to come to the Conference to defend it or else you forget it. The head of the Panel was so very articulate, mature, principled, disciplined and she was very accommodating. She would listen patiently to lengthy submissions and presentations by Panel members and once she sensed a particular line of thought of the majority of the members, she would gladly go with us. And in some cases she would seek to persuade us based on her peculiar experiences on the Bench and at other times she would just cast the vote to resolve a lot of issues. And we all could not but thank God for her, given her age, that she was not absent on any day of sitting of the Panel. So, we did not have to adjourn on account of the absence of the presiding officer.

And this is why I regard the Panel’s work as a model for Nigeria, in the sense that if the real motive is service to humanity, then there would be no need for these games that we see our leaders play in the national political space, with the collective destinies of our people. If politicians can be allowed to serve on a part-time basis, with minimal sitting allowances, without forming factions, without godfathers and without hidden allegiance to tribe and religion, then our nation will move forward.

The Panel submitted its report to the Governor of Lagos State on November 15, 2021, for onward transmission to the federal government through the National Executive Council. We will discuss other matters in detail in subsequent editions. Suffice it to thank you all for the confidence reposed in us for this critical assignment.