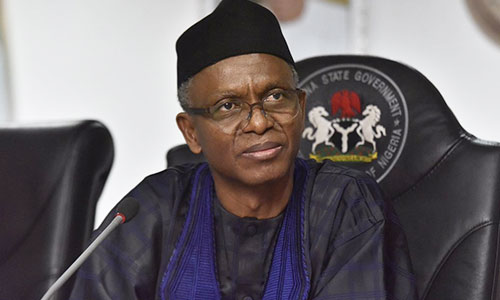 Minister of State, Education, Chukwuemeka Nwajiuba, also spoke at the occasion which featured the presentation of HCD Brand Identity as well as the unveiling of HCD Brand Logo and National Dashboard.

El-Rufai said only the political leadership would avert the Afghanistan scenario through a massive investment in the country’s education sector to address the menace of banditry, terrorism, and kidnapping, among other social ills.

He said: “I represent the North West zone in Human Capital Development Council. And as you know, our part of the country is afflicted with the highest numbers of out-of-school children. Some of the highest poverty rate and some of the highest drop-out rates in our schools.”

“As if that is not enough, many of our schools are now closed due to the insecurity around our boarding schools. In most of the states of the North West, schools have been closed for a while, while security operations are taking place making our educational situation even worse.

“Our health statistics are not better. This is why you will notice that only the North West has the highest representation of governors or Deputy Governors here. My elder brother, the deputy governor of Katsina, is here. Because this subject is very, very important to us. It is what keeps us awake at night.”

“We have the largest population of any geopolitical zone in the country. That is both a blessing and a curse. A blessing if we keep the population healthy and educate the children and give them skills for the future. Because, if they’re not educated, they’re not healthy and they feel hopeless.

“This is what we’re seeing with our insecurity. Most of the bandits we arrest have never gone to school. They have no notion of religion, whether Christianity or Islam, and they have no hope. If we don’t invest in education, health care, nutrition, our situation will just get worse.”

El-Rufai, who stressed the need for political leaders in the country to always “do the right thing” while providing governance, commended Osinbajo for providing the will as well as being in the forefront to facilitate attention needed to address the challenge.

The governor wondered why state governments fail to apportion substantial percentage of their budgets to fund the education sector which has capacity to bring about the needed development in the long run.

“Why are state governments not budgeting at at least 25 percent, 26 percent for education and for health care, as recommended by you the United Nations (UN) agencies.”

“And when these monies are budgeted why are they not spent in the right available, that politicians have a four year election cycle? But it takes 30 years for the result of investment in education to show. But building roads, building secretariats are clearly evident.

“Politicians tend to ignore education and healthcare….the results show long after you leave office, in my humble opinion, the most important target of this message is our political leaders. The strategy is clear, the communication can be improved. We can work on the demand side of human capital development services, we can work on the supply side, but until and unless our political leaders realise the imperative of taking very difficult decisions for today, so that generations will benefit.

“I want to call on all of us to continue this conversation and continue to put pressure not just on the demand and supply sides of human capital health education, nutrition and so on. But on the political leaders that ultimately make the decisions, on budgeting, on spending, and on getting results,” the governor said.