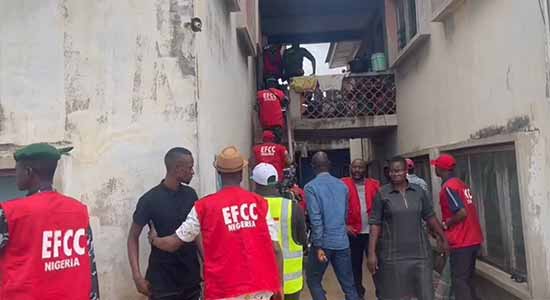 Operatives of the Economic and Financial Crimes Commission, EFCC, on Saturday arrested a suspected vote-buyer in Ekiti State as the governorship election commenced.

EFCC operatives apprehended the suspect with a bag of cash as he was “inducing voters.”

The suspect said to be an agent of the ruling All Progressives Congress, APC, was taken into custody at Ola Oluwa Grammar School on Ilawe Road, Ado Ekiti.

Also a member of the People’s Democratic Party (PDP), Damola Ojo, was arrested in Ado-Ekiti by operatives of the Economic and Financial Crimes Commission (EFCC).

Ojo was whisked off at a polling unit inside Ola Oluwa Muslim Secondary School, Ado Ekiti, following a tip off.

Ojo, whom the PDP agent at the polling unit, Babajide Adebayo, described as an Engineer was caught with a large sum of money.

TheNigerialLwyer checks, however, revealed that before the arrival of the EFCC officials, there was voters inducement across the parties divide.

Adebayo who confirmed Ojo’s arrest told journalists that he had since informed chieftains of the PDP for their intervention. He denied that Ojo was giving money to voters.

He said: “When EFCC people came, somebody pointed at Ojo, who was standing alone. There was nobody with him, he was not talking to anybody or giving money to anybody, he was arrested and whisked away. Ojo is an Engineer, he came to work in Ekiti but I have made calls to tell our leaders about the arrest.”

Across the state, party members still reached out to voters secretly not far from polling units where men of the anti-graft agency were sighted.

The Independent National Electoral Commission, INEC, had cautioned voters ahead of the election.

INEC had warned of strict enforcement of rules against cash inducement of voters.

The body made this known while unveiling its partnership with anti-graft agencies, the EFCC and the ICPC, on Friday.