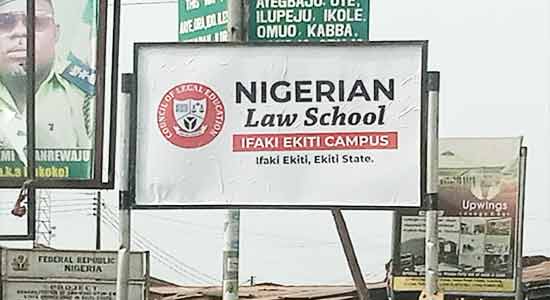 The people of Ilawe Ekiti, Ekiti South West Local Government Area of Ekiti State, have faulted the claim by the Nigerian Bar Association (NBA), likening the establishment of some law school campuses to distribution of constituency projects.

They posited that the NBA lacked power to stop the federal government from exercising its powers to establish the campuses, where the town benefited, saying NBA’s warning to the lawmakers not to turn the school to constituency project, was a mere expression of opinion.

Speaking recently at an event at the Are Babalola University, Ado Ekiti, the National President of NBA, Mr. Olumide Akpata, had warned the National Assembly against the proliferation of law school campuses, saying such could rubbish the profession.

But at a press conference heralding the 10th coronation anniversary of Alawe, Oba Ajibade Alabi, yesterday, the community, said it was right for the National Assembly to have considered the town worthy of having a campus of the school.

The Chairman of the Coronation Anniversary Committee, Captain Kunle Layiwola, commended Oba Alabi, who is a former Diplomat in South Africa and many other countries representing the country, for his commitment to the development of the town

Layiwola said: “Law school issue has been thoroughly discussed. Campuses have been coming up before now, so what the NBA said was a mere academic exercise.

“It is the government that has power to establish law schools. The Senate had passed the bill creating more campuses. The House of Representatives will soon pass same. We appeared before the Senate Committee on Judiciary to defend our position and nothing has changed as we speak, it will be sited here.

“In UK and US, there are so many law school campuses. Over 5,000 students graduated as Law students and could not be enrolled in law school for lack of space. If the Senate Committee on Judiciary could find it expedient to establish more campuses, so be it.”

Layiwola revealed that part of the events lined up for the celebration would be flagging off of the N300 million banana processing industry that would bring radical development to the community.

He added that the Ekiti State’s First Lady, Mrs. Bisi Fayemi, would be conferred with the honourary chieftaincy title of Akorewolu of Ilawe Ekiti while nine others would become honorary chiefs of the town.

Layiwola added that a Senior Advocate of Nigeria and Human Rights Activist, Mr. Femi Falana, and six other prominent indigenes would be bestowed with honorary awards, for their contributions to the town.

He said: “We are celebrating this monarch because he was the first Alawe to be Chairman of Ekiti State Traditional Council. It was under his reign that the federal government plans to establish a law school here in Ilawe.

“He has also made Ilawe a cynosure attracting investors, facilitated the establishment of a model girls school, high and magistrate courts and well equipped hospital. All these happened within 10 years of his reign.”