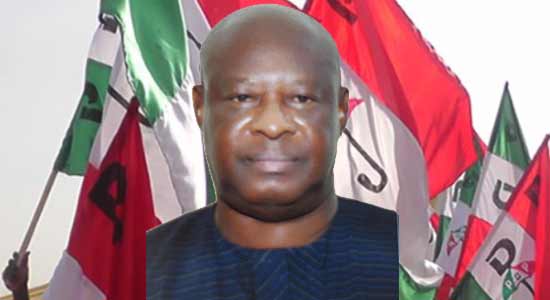 The Caretaker Committee Chairman of the Peoples Democratic Party, PDP, in Ebonyi State has on Tuesday, petitioned the Chief Judge of the Federal High Court accusing the Chief Registrar of the Court, Mr. Emmanuel Gakko Abuja, of obstructing the course of justice, usurping the powers of Federal High Court judge and of conduct likely to undermining the integrity and jurisdiction of the court.

In a petition dated February 19, 2021 sighted by TheNigeriaLawyer, Chairman of the PDP committee in the State, Hon. Fred Udeogu, said they filed a suit via Originating Summons with suit No: FHC/ABJ/CS/1609/202, between himself & 10 others v Chief Onyeakachi Nwebonyi & 3 others on December 1, 2020

He said they also filed a Motion Exparte dated December 1, 2020 for substituted service; same was granted and 1st – 3rd Defendants were served accordingly

However, according to Udeogu, the 1st – 3rd Defendants filed a Motion for setting aside of the substituted service and went further to petition the Chief Registrar accusing the court bailiff of not serving the process in spite of the pending Motion filed by the same Nwaeze seeking to set aside the same service

Furthermore, Udeogu said without making diligent confirmation, the Chief Registrar set up a panel to try the bailiff

“My Lord the Chief Registrar of the Federal High Court who himself is a lawyer could not wait for the determination of the Motion on Notice, pending before this court, filed by the same Roy Nwaeze Esq, challenging the same service of the process es of the Court, on the 1st – 3rd Defendants before rushing due to pressure by Roy Nwaeze Esq., to set up a panel to try the Bailiff of the Federal High Court.

He then asked, “My Noble Lord I wonder Why the Chief Registrar of the Federal High Court, was in such a haste to set up a panel to try the Bailiff over an issue that has already been submitted before the court for adjudication?”

Udeogu said the Chief Registrar is an epitome of high moral standard and ought not to be found wanting or negligent in the discharge of his duties adding that he (Udeogu) wonder why the Chief Registrar failed to investigate the status of the matter before setting up a panel.

He said the Registrar has betrayed the trust imposed on him given his exalted position in the temple of justice. He therefore urged the Chief Judge to disband the panel set up by the Chief Registrar aimed at trying the Bailiff