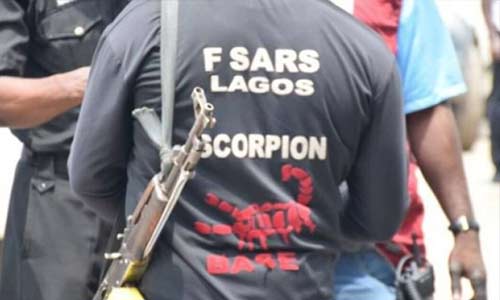 *Send us to the United Nations since you longer need us, they say

Some operatives and officers of the Special Anti-Robbery Squad (SARS) in Lagos have reacted to the Directives of the Inspector General of Police (IGP) inviting them to Abuja for psychological and medical examination.

The Operatives who spoke with Saturday Sun lamented that IGP’s directive will force them into unplanned debts as they may need to borrow money for transportation, accommodation and feeding, at their own expense.

A Deputy Superintendent of Police said they may not be reimbursed for their expenses even if such promise is made. He added that the evaluators should have been sent to states for the evaluation instead

“We do not love ourselves in this country especially policemen

“In Lagos alone about 700 policemen are affected. You can imagine the number that will be moving from across the country. Who will pay for their accommodation in Abuja for the number of days that they might end up staying?

We know how these things work; so don’t be deceived even if they tell you that the money will be refunded. We are already stressed out and paying for the sins of few bad eggs in the police. I know that it is the right thing to do by listening to the yearnings of protesters but whatever decision that is to be made should also have a human face.

Those evaluators can be sent to states to handle that. I just finished paying school fees for four kids and my account is empty. Buhari, please we also need help,” he lamented.

“If we are going to be used as the sacrificial lamb for change to come to the force, then it’s okay,” he said.

The Inspector decried his experience as a SARS officer. He said he almost died during an exchange of fire with armed robbers but treat the injuries he sustained himself without any external financial aid. He added that their baracks are “eyesore” and they use their meager salary to buy uniforms

“I am not making case for those who left their jobs and decided to dine and wine with Yahoo boys. I have put my life on the line severally. I guess you have observed that I no longer walk properly; it was bullets pumped into me by armed robbers during a clash in 2014. I nearly died but God kept me alive. I paid for my treatment because there was no provision for such.

I am even happy that we can be posted to areas where we can relax a bit and enjoy police work. Our barracks is an eyesore; you cannot even survive based on the salary paid. We buy uniform with our money and we are expected to use our money to investigate cases. The only place that I enjoyed police work was at Ilupeju branch. There the PCRC (Police-Community Relationship Committee) does a lot for us to support our welfare.” he said

A constable on the other hand said they should be posted to the United Nations “…tell them to send us to United Nations for evaluation. We will love to be posted to guard oil companies. Let those who have been receiving dollars as allowance come home and fight violent crime.”

He said he works 24 hours and most time six times in a week. He has lost about eight of his colleagues while trying to keep Lagos safe and their wives are suffering because they are not insured.

“I know that you will argue why did I join Nigerian police and my answer will be because it’s the only available job.

“All those that suddenly started patronizing fraudsters are doing it to change their story. Most of the rank and files retire from police and become beggars. If you are not lucky to have trained your children to the point that that they can take care of you then you are doomed. I personally want to leave SARS but please do not send me to railway where I will finally die of poverty.” he said

A sergeant who currently serves with Rivers State Command said that he is relieved that they were disbanded. He too said they should be posted to the United Nations where he will have the opportunity of changing his family

He said, “Let them send us to United Nations where policemen are paid with dollars. I will have the opportunity to change the destiny of my family.

“I have served in Lagos since 2010, when bank robbery was the order of the day. Who complained about anything? Everyone was excited at our job and gradually we fazed it out. I am not justifying the acts of those who took laws in their hand but everyone should note that most of these persons crying foul are confirmed criminals.

Go and ask that lawyer whose wife and children were raped in his presence. Every day, he will land at SARS claiming human rights and succeed in releasing so many criminals. The day they visited him, it was horrible. He came back with a long list of those he released that it is confirmed that they are criminals. We have done a lot as to warrant such treatment by Nigerians.”