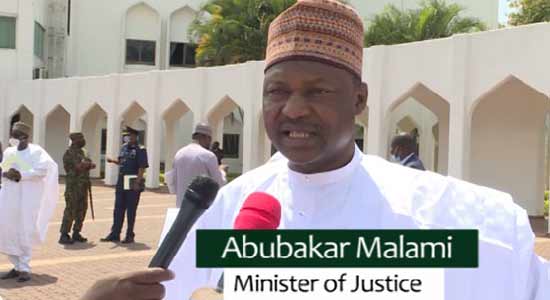 *$139m Recovered From Keystone Bank Was Paid Into TSA

The Attorney-General of the Federation, Abubakar Malami (SAN), says President Muhammadu Buhari, will consider the security and financial implications of direct primaries before signing the Electoral Act amendment bill into law.

Malami said this on Channels Television’s ‘Politics Today’ programme on Sunday which was monitored by our correspondent.

Most governors have rejected the direct mode of primary while the National Assembly insists that it be signed into law.

Several political parties have also kicked against the direct primary, stating that it is undemocratic.

Recall All Progressives Congress governors had begun lobbying Malami with a view to convincing him to advise the President not to sign the bill.

While refusing to give an opinion on the matter, Malami stated that the President would be guided by the need for justice, legal issues, the security situation in the country and the cost.

Malami also clarified the controversy regarding the $139m recovered from Keystone Bank.

The Executive Director, North and Public Sector Directorate, Keystone Bank, Lawal Ahmed, at an investigative hearing last week stated that Malami asked the bank to pay government’s funds to the tune of $96m in dollars while $40m be paid in naira at a rate of N303/$1.

Reacting, the justice minister stated that the money was paid into the Treasury Single Account and this was the prevailing exchange rate at the time in 2017.

Malami further argued that the payment method was varied because the bank did not have enough dollars.