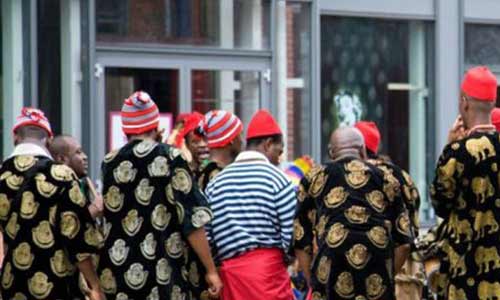 The Ohanaeze Ndigbo Worldwide has condemned in very strong terms the unwanted destruction of Igbo property and business outfits during the protest by the Muslim faithful in Sokoto on Saturday.

Ohanaeze wondered the link between the Igbo traders and Miss Deborah Samuel, the Christian student who was alleged to have blasphemed against Prophet Muhammad on Thursday, May 12, 2022, to warrant the destruction of Igbo properties.

National Publicity Secretary of Ohanaeze Ndigbo, Dr. Alex Ogbonnia in a statement, Sunday evening, said the group watched the viral video clip about what transpired with intense curiosity, especially the killing and burning of Miss Samuel at the Shehu Shagari College of Education, Sokoto and could not in any way fathom any iota of Igbo connection to the incident.

Ohanaeze noted that there was no iota of Igbo involvement in the alleged blasphemy, adding that the question on every lip all over the world had been “why again the Igbo?

However, the apex Igbo body commended Sokoto State Governor, Aminu Tambuwal, for his timely intervention, while urging him to ensure that all those that were involved in the destruction of the Igbo property were brought to book.

Ohanaeze called on the governor to mitigate the losses incurred by the Igbo traders in Sokoto State over what they knew not.

It then urged the Igbo traders remain calm while they took inventory of their losses for possible compensation by the government.

“It is very unfortunate that at any time there is any form of misconception or crisis in the North, it often ends with a mob that goes against the Igbo commercial and residential interests.

“For instance, in February 2016, there was a cartoon about Prophet Muhammad by the Danish newspaper in faraway Denmark which generated an international uproar. The uproar took an inexplicable barbaric dimension in Maiduguri, Nigeria where over 50 people, identified as Christians were killed, mostly of Igbo ethnic group and many of their properties were either destroyed or damaged by rioting Muslims.

“Perhaps, this is why Ambassador Professor George Obiozor, the President-General of the apex Igbo social-cultural organisation, Ohanaeze Ndigbo, prophetically lamented that insecurity of Igbo people in Nigeria has reached a dangerous level of existential threat, saying Igbo are the most vulnerable and victims of violence throughout Nigeria.

“Ohanaeze Ndigbo believes that the core essence of religion all over the world is to enhance humanity with such values as love, peace, fellow feeling, etc. The transcendental imperative of every religion revolves around charity, kindness, humility, sincerity, tolerance, empathy and the likes. The diversity of mankind makes it practically impossible for everybody to belong to one faith.

“On the other hand, if every religion embarks on cleansing of the members whose faith are at variance, we all shall revert to the Hobbesian state of nature where life is solitary, poor, nasty, brutish, and short.

“In positing that Muslims who kill Christians in Nigeria over blasphemy won’t smell Paradise, an Islamic Scholar, Sheik Ahmad Gumi contended that “there are people who are neither Muslims nor Christians in Nigeria and everyone is trying to win their souls. Also, there are people who are not Muslims, whom we are preaching Islam to so that they can enter the fold of Islam and be salvaged in the hereafter. According to Gumi, “If we now begin to kill people, they will say it is even from the leader of our faith, Prophet Muhammad that we have learnt it. They will say their religion is a religion of bloodletting”.

Ohanaeze Ndigbo asks the Igbo community in Sokoto State to remain calm and take stock of all the damages done to their houses, shops and goods in Sokoto on Saturday, May 14 with a view to seeking compensation from the relevant authorities. The Igbo owe it a duty to work hard and also contribute in developing every community they find themselves. That is patriotism,” Ohanaeze stated.