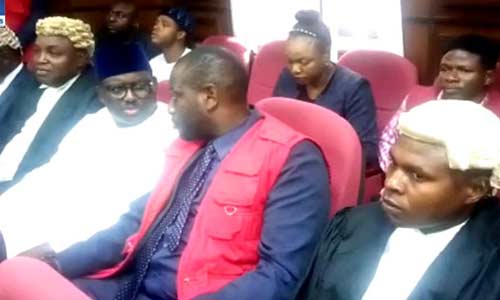 A Federal High Court in Abuja on Monday granted further variation of the conditions attached to the bail earlier granted ex-Chairman, Pension Reformed Task Team (PRTT), Abdulrasheed Maina, which he could not meet.

Maina is being tried before the court by the Economic and Financial Crimes Commission (EFCC) on a 12-count money laundering charges.

In a ruling on Monday, Justice Okon Abang said he decided to grant Maina’s prayer on compassionate ground, especially after he had been able to produce a serving senator in the country, in the person of Senator Mohammed Ali Ndume.

Justice Abang said it was within the court’s jurisdiction to either grant bail by vacating the existing conditions or grant new conditions.

He faulted Maina’s lawyer argument that the earlier bail conditions as “suffocating and unbearable,” noting that such submission was baseless going by the facts placed before the court by the EFCC.

The judge said: “I felt the statement that the conditions was suffocating seems to portray the court as being inhuman in my view.

“I know the court is not inhuman. I take the fact of the case the way I understand the law.

“If you consider the fact of this case, you will agree with me, because in the affidavit of the defendant (Maina), he said he was ready to fulfill the bail on any condition,

Besides, Abang stated that in the EFCC argument, Maina was said to be “a flight risk and that he comes into and out of the country through illegal routes.”

He noted that the anti-graft agency argued that “he will jump bail if granted; that he does not reside in the country; that his international passport does not indicate that he ever travels outside the country through legal means.

The judge said, with this development, he had to consider the competing rights of the parties.

“And that is why I arrived at a senator in standing surety for the 1st defendant, not somebody who does not have stake in the affairs of this country.

“That is why I said I took a risk in admitting him to bail, based on the weighty allegations by EFCC which the 1st defendant did not challenged.”

The judge refused to grant the request that the court jettison the condition that the senator, who stands as surety must attend court to sign a register on each hearing date.

“I think the issue of signing registrar has been settled by the surety. The court cannot revisit this again.

“The surety has already signed an affidavit of means, especially in Paragraph 9 which he said I shall fulfill the bond of oath.

“Having agreed to come to court with the defendant, this cannot be jettison by any person other than Senator Ndume,” he ruled.

He held that Ndume understood clearly what he deposed to in the affidavit of means on May 5.

The judge rejected the defendant’s argument that it might be difficult for the lawmaker to be coming to court at every sitting, describing it as “a documentary hearsay.”

Justice Abang then granted Maina’s prayer on the acceptance of irrevocable power of attorney in place of a certificate of occupancy (C of O), which the court had directed that the surety produced.

He said: “I note here that the name on the C of O is not in the name of Senator Ndume. I also note that the certificate of occuoancy cannot be issued twice.

“I also note that the applicant cannot wait until the FCT minister signs another certificate in his name.

“I think on compassionate ground, the court will accept the irrevocable power of attorney as condition for a certificate of title.

“This is so because the defendant has met with the main condition of producing a senator,” he held.

The judge warned that should Maina jumped bail, the court might either order the remand of Ndume in a correctional centre or for the surety to forfeit the penal sum.

The judge also said that both penalties might be meted out against the surety if the defendant jumped bail.

He, however, advised Maina not to attempt to jump bail “by putting his surety in embarrassing situation.

“In the light of the humane disposition of the court on compassionate time, there is the need to further vary the already varied conditions for the 1st defendant to meet his nail conditions and stand his trial,” he ruled.

He ruled that the surety should either produce a certificate of occupancy of a property in the Asokoro, Maitama, Wuse II, Katampe District or Central Business District of Abuja signed by relevant department in the FCT or armed himself with irrevocable power of attorney.

The judge said the investigation officer in the EFCC should ascertain the validity of the power of attorney.

He said the defendant shall not leave the FCT, Abuja, pending the hearing and determination of the charge, except with the permission of the court.

The judge then adjourned till July 2 for the continuation of trial.