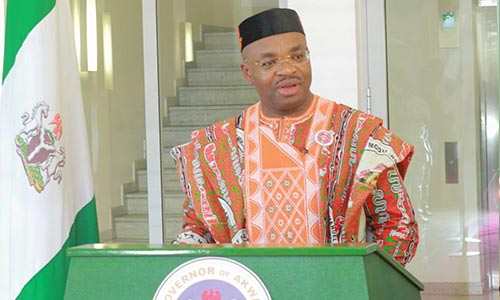 A State High Court in Uyo has postponed judgement on a case asking it to set aside its earlier ruling in which the Akwa Ibom State Governor, Udom Emmanuel, was awarded N1.5 billion as damages for libel.

The judgement was scheduled for Tuesday in a State High Court in Uyo, Akwa Ibom State, after the claimant’s counsel, Samuel Ikpo and defence counsel, Inibehe Effiong, had presented their arguments in the case.

But the judge, Ekaete Obot, who is the state chief judge of Akwa Ibom State, ordered the defence counsel, Mr Effiong, to file an application for change of counsel.

Justice Obot said Mr Effiong “came in through the backdoor”, and that she could grant him appearance in the matter.

Mr Effiong took over the case after the court, on December 15, 2020, ruled that the defendant, Leo Ekpenyong, should pay the claimant, Governor Emmanuel N1.5 billion as damages for libel.

Governor Emmanuel had sued Mr Ekpenyong for defamation of character over a publication in which he accused the governor of “buying judgment” from the 2019 National Assembly Election Tribunal.

Mr Effiong, who made his first appearance for the matter on November 25, 2021, argued that the court had breached the Nigerian Constitution in its December 15, 2020 judgment against his client, Mr Ekpenyong.

In less than five minutes court session on Tuesday, Justice Obot ordered Mr Effiong to apply for regularisation of counsel as he (Mr Effiong) was taking over the same case from the former counsel. She further ordered that the former counsel be served.

The court is hearing the matter simultaneously with another defamation case between a former senator, Effiong Bob, and Mr Ekpenyong, which the court had ordered Mr Ekpenyong to pay N150 million as damages to Mr Bob.