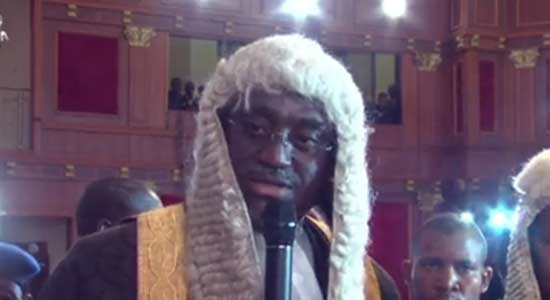 The President of the Nigerian Bar Association (NBA), Mr Yakubu Maikyau (SAN), has attributed the insecurity, economic crisis, political instability and corruption plaguing the country to the absence of justice in the society.

“The legal profession (the Bar and Bench) has been rendered incapable of dispensing what is otherwise its primary responsibility of promoting the rule of law to serve the cause of justice”, he said in speech at the ceremony.

While pointing out that Nigerians look up to the legal profession for the recovery, reformation and repositioning of the country, the NBA boss said this can only happen through a deliberate pursuit of justice, which must be led by the legal profession.

He said the existence of a strong and independent judiciary is critical in the attainment of a state of affairs where justice will not only be present but also seen to be present, even as he lamented that the salaries and allowances of Judges and Justices in the country have remained the same since 2009.

Maikyau observed that the report of the committee on the review of judicial salaries and conditions of service, submitted to the Attorney General of the Federation (AGF) since June 2018 has yielded no positive result.

“Notwithstanding the current state of things, the Supreme Court in appeal No. SC/655/2020, in a rare but unsurprising display of strength of character, declared unconstitutional, null and void and of no effect whatsoever, Executive Order 10, which seemingly meant to help uplift the welfare of Judges and Justices. The apex court held that the President overstepped the limits of his powers and that the country is run on the basis of the rule of law.”

He said, it is worrisome that non of the presidential candidates for the 2023 election, who attended the opening ceremony of the just concluded NBA conference on the 21st of August spared any thought on the independence of the judiciary.

According to the NBA President, the only way the government can show sincerity in the bid to recover and develop the country is to deliberately invest in the welfare of Judges and Justices by strengthening the human capital within the justice sector and meeting all the infrastructural needs of the Judiciary.

He called for the government to revisit the 2018 report of the committee on the review of judicial salaries and conditions of service, to bring the same in tune with the present-day realities and give effect to the final recommendations that will arise therefrom.

In his speech, the Attorney-General of the Federation (AGF) and Minister of Justice, Abubakar Malami (SAN) said, improvement of the remuneration and conditions of service of judicial officers remains uppermost on the agenda of President Muhammadu Buhari.

He said the government is not oblivious of the persistent challenge in the area of salaries and welfare of judicial officers and, however, added that the ongoing process of improving the welfare package of judicial officers will be completed, in accordance with extant constitutional and statutory provisions.

He said the government also makes special budgetary provisions to cater for special assignments associated with national elections and that Government will not rest on its oars in its quest for increased funding for the judiciary.

Malami commended the foresight of the President of the Court of Appeal in taking proactive steps towards an effective discharge of the onerous constitutional mandate over the outcome of elections, saying that the notable steps included engagement with relevant stakeholders, especially with the advent of the 2022 Electoral Act.

The manual, he noted was expected to guide both the bar and the bench, with an added benefit of mitigating the problems associated with conflicting decisions.