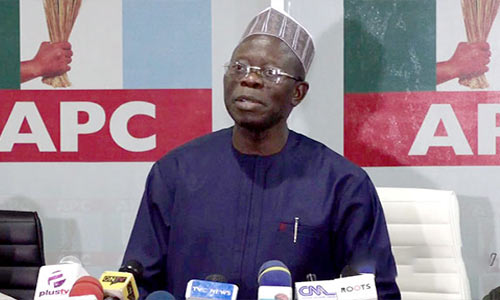 The Court of Appeal sitting in Abuja has dismissed the suit filed a former National Chairman of the All Progressives Congress (APC), Adams Oshiomhole, challenging his suspension from the party.

A three-man panel of judges presided over by Justice Uchechukwu Onyemenam unanimously dismissed the appeal on Tuesday at the request of the former APC national chairman.

Oshiomhole had approached the court seeking to challenge his suspension from the party by officials of his ward in Edo State.

Justice Danlami Senchi of an Abuja High Court had given effect to the suspension of Oshiomhole from his ward on the ground that the executives of Ward 10 in Etsako West Local Government Area of Edo State acted in line with the constitution of the party.

At the resumed hearing of the suit, the counsel representing the former chairman informed the court of his client’s decision to withdraw the suit which originally sought a stay of execution on the judgment of the court affirming his suspension.

Other members of the three-man panel are Justice Mohammed Mustapha and Justice Muazu Lamido.

This comes after President Muhammadu Buhari appealed to all aggrieved members of the APC to withdraw all pending litigations in the interest of peace.

The National Executive Council (NEC) of the party had also dissolved the National Working Committee (NWC) of the APC.

In his reaction, Oshiomhole accepted the decision of the council and pledged his loyalty to the ruling party and the President.