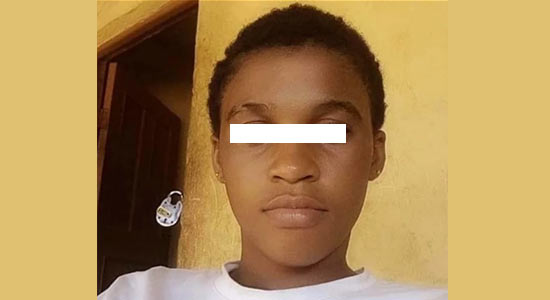 Contrary to allegations that a 16-year-old girl, Chidera Okoro, currently detained by the Department of State Services (DSS) in Imo State, was impregnated by its operatives, the suspect was said to have gotten pregnant before her arrest, Daily Sun report.

The suspect was arrested on March, 16, during a raid on the camp or the suspected leader of the unknown gunmen, popularly known as “Ejima” terrorising Imo state and the neighbouring states in the South East, at Atta Umunnam Njaba local government Imo State.

However few weeks after she was arrested, she fell sick and was taken to a medical facility where a laboratory test conducted on her on June 3, showed she was 22 weeks pregnant.

It was as gathered that Okoro told the DSS operatives that Ejima, who is now on the run, was responsible for her pregnancy.

A led by one Anyi Kings, had on July 14 raised the alarm that Okoro, was four months pregnant and accused operatives of the DSS, whom they alleged were using the suspect alongside other females in custody as sex slaves as being responsible.

The group had also accused the imo state Governor Hope Uzodinma, of conniving with the DSS, to incarcerate the suspects and terrorise the people of Imo states and appealed to human rights organisations to help speed the release of Okoro from DSS custody.

MEDICAE MANUS, located at Awuka street, Owerri the state capital, for another medical test.
Daily Sun, gathered that the result of the medical test conducted on July, 22, showed that Okoro was 27 weeks and six days pregnant, whereas she was arrested on March 16.

Satisfied with the outcome of the result of the medical report, the state government handed her over back to the DSS, where she has been in custody.

A security source who does not want to be mentioned in print told Daily Sun, that the alarm raised by the group was aimed at tarnishing the image of the service and jeopardising investigations which are ongoing and so far recorded tremendous successes.

The source said it is unfortunate that the young girl was arrested with pregnancy and never told anyone until she fell sick and was taken to a medical facility.

When contacted on the allegations, the DSS public relations officer Peter Afunaya, no right-thinking personnel would engage in a sex scandal with a suspect in custody saying the service has a standard operating procedure that is binding to all personnel.

He said the DSS takes matters of this nature very seriously and with a stiffer penalty for anyone who engages in such cheap and stupid acts.

He said “with the information you have about the results from the tests conducted so far by independent organisations other than the DSS, clearly, the facts are speaking for themselves and the Service has been vindicated.

“We are trained to investigate and not to take advantage of suspects in our custody,” he said.