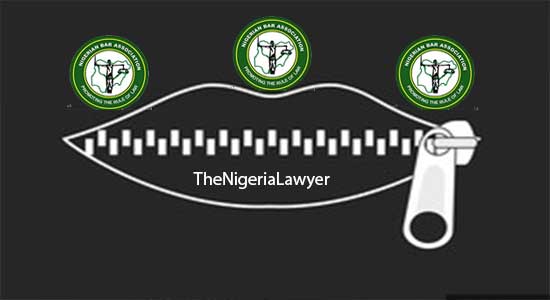 In Nigeria, controversies especially in the judiciary are not strange. This is practically due to the contestation between true judicial independence and crass desire of the political class to pocket the third arm of government as a subservient appendage.

In view of the tendency of politicians to attempt a whimsical control of the judiciary, the Nigerian Bar Association for decades through different administrations have prioritized standing in defense of the judiciary against intimidation and executive rascality.

However, without prejudice to the gains and efforts made by the incumbent NBA leadership headed by Yakubu Chonoko Maikyau, it seems the NBA is gradually losing its pristine role as the defense of the judiciary. In the past few months, the NBA has stood numb in the face of several assaults against the judiciary, and we are yet to see the Association take a decisive stance in the face of the numerous controversies riddling the judiciary.

Few weeks ago, the news of how a Magistrate in the Nasarawa State Judiciary, Magistrate Aisha Abdullahi was transferred over a bench warrant she issued on the Commissioner of Works, Housing and Transport in Nasarawa State, Engr. Idris Mohammed. Abdullahi, the presiding Magistrate of Senior Magistrate Court, Uke on October 31, 2022 issued the warrant for the arrest and remand of the Commissioner at the Correctional Centre, Keffi citing “continues disobedience to the court”.

Reacting to the warrant, an aide to the Commissioner, Aliyu Bello Aliyu, said the Magistrate erred for issuing the warrant. Aliyu, claimed that she has since reached out to the Commissioner for forgiveness over what he called “misconduct”. “She will undergo special punishment,” the Aide added.

The arrogance and effrontery of the aide to a Commissioner to declare publicly that a Magistrate will undergo “special punishment” and few days later, the Magistrate is the subject of a controversial transfer from her posting should cause worry to anyone genuinely concerned about the integrity and sanctity of Nigeria’s judiciary.

It is highly contemptuous for a mere Commissioner aide to make such demeaning comments about a judicial officer, and even more embarrassing that his words came through as the unwarranted transfer can be construed as the “special punishment”.

Against this backdrop, it is only disappointing that the NBA IN LAFIA, and National level are yet to take an official position on the matter. They  have not even instituted an investigation or enquiry to ascertain the circumstances surrounding the controversial transfer since there are different tales regarding what actually transpired.

According to the Executive Secretary of the State Judiciary Service Commission, Yahaya Yakubu Shasa, the report of vindictiveness in the transfer is false. He told TheNigeriaLawyer in an interview, “This is false, there was a routine transfer and the magistrate was affected, the fact that she handled such a case is purely coincidental.
The Nasarawa State Judicial Service Commission cannot be bullied by any individual no matter how highly placed.”

Yahaya, emphasised that the transfer was a routine process which the Commission decided to embark upon in order to rejig the Magistrate Courts.”

The Magistrates Association of Nigeria (M.A.N) Nassarawa State Branch in its reaction had expressed its displeasure with the arrangement transferring a Magistrate, Aisha Abdullahi over the issuance of a bench warrant by her Worship against the state’s commissioner of Works, Housing and Transport, Engr. Idris Mohammed.

It was expected by those familiar to incidences like this that the NBA will intervene in order to save the judiciary from the embarrassment and moral dampening perception of helplessness before the “powers that be”.

As M.A.N put it, the Magistracy and its executive were aware that transfer is a routine exercise in the judiciary, however, it noted that in this case, it had the tendency of dampening the moral of the judiciary.

“The recent transfer of Aisha Abdullahi is capable of dampening the moral of Magistrates and litigants when handling high profile matters”,

The question begging for answer is “why has the NBA leadership turned a blind eye to this unfortunate development?”

We hope executive rascals do not get the hint that the defense of the judiciary has been silenced, and proceed to launch a barrage of assaults on the independence of the judiciary. This will be disastrous for the country especially as we proceed into election year.