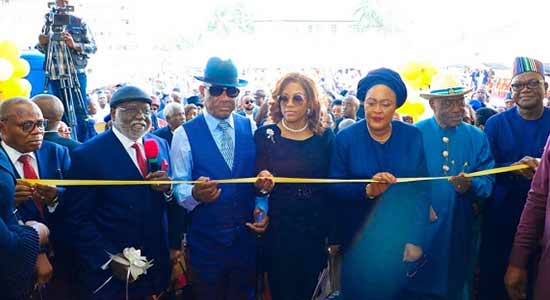 Rivers Governor Nyesom Wike has approved N500million as a take-off grant for the Justice Mary Odili Judicial Institute (JMOJI) built by his administration in Port Harcourt.

Wike announced the grant when the Chief Justice of Nigeria (CJN), Olukayode Ariwoola, inaugurated the institute on Friday.

Wike said that money was needed for the institute to start off its operations immediately after the inauguration.

He said: “I have made my budget presentation and it was not included. I’ve told the Commissioner of Finance, now that the budget has not be approved, make sure it is included in the 2023 budget.

“But to start off for now until next year budget will be released, we are making a grant to them of N500 million so that the institute

Wike observed that the National Judicial Institute (NJI) saddled with the responsibility of training judges and magistrate yearly is overwhelmed with the challenge of carrying capacity.

He said not every judge and magistrate billed for the continuous training exercise would be fortunate to secure admission in any current year of such request.

He said the Justice Mary Odili Judicial Institute was designed to fill the gap by allowing judges and magistrates regular access to training and educational opportunities in Nigeria.

He said: “Actually, if Nigeria is operating a true federal system, there is nothing wrong for states having their own judicial institute that will train judges who, of course, apply the laws, preside over matters that affects the State and business around here.

“But we thank God today that the federal government through the CJN has approved it. What we are doing is to complement the efforts of NJI.

“We are not taking over the functions of NJI. We are only complementing, so that our own judges will be ahead of other States.”

The governor also informed that the Justice Mary Odili Judicial Institute would be willing to accommodate other judges and magistrates referred to it by NJI and train them free of charge.

“We can also allow them free of charge to come for training here in order to reduce the financial implication of sending most of the judges in the Southsouth to go to Abuja”, he said.

He said: “For us, it is not only a Judicial Institute, in fact, I’ve called the attention of the Attorney General to it. And from what the Chief Judge read today, I will seek for amendment by Monday because there are so many things I’m not too comfortable with.

“Because I want a body that, of course, you’ll have a supervision but it will not look like the supervision that will hamper the working of the institute.

“I want where the institute will be just like you have the arbitration court, you have the family court and the rest where budget is being made for them. There will be a different budget for this institute so that we know that it is working.”

Wike explained that the institute was named after Justice Odili, a renowned jurist of Rivers State extraction, who ranked as the first to have risen from the magistracy to the Supreme Court of Nigeria and returned with unblemished record of service.

He explained that the land where the Justice Mary Odili Judicial Institute is located, beside the State Judiciary Complex was formerly owned by the defunct Nigeria Airways.

“The dilapidated and abandoned buildings there became a hideout for criminals, hence the decision of the Rivers State government to acquire the property and use it for public good”, he said.

Performing the inauguration, Chief Justice of Nigeria, Olukayode Ariwoola said that Wike was one lawyer in position of authority, who had remained relentless in speaking up for the growth, progress and prosperity of the Nigerian Judiciary.

He said: You have thus far given a good account of yourself as distinguished life bencher. To say we are proud of your Excellency is an understatement. You remain a shining light in the legal profession and we shall always remember you for your unflinching support in the erection of enduring judicial structure in the country.

“At this level of our national development, we should begin to emulate good things that will usher in a new dawn of progressive growth. This is, no doubt, a bold step worthy of commendation and emulation.

“You are one of the few governors who have pledged to give judges owner occupier residences so that when they eventually retire, they will get a life time accommodation.

“Today, that pledge has not only be fulfilled but has formed part of our history. Your efforts will tremendously improve the service delivery and comfort of our judicial officers.”

In her speech, Justice Mary Odili said she and her husband had tried in vain in finding best way to thank Wike for his benevolence to them, including the naming of the institute after her.

She submitted that since it was difficult to do so and she could never repay Wike for all that he had done for them, they had presented him and his family to the Almighty God for the adequate reward due him.

Rivers Chief Judge, Justice Simeon Amadi explained that the inauguration of the institute signifies the actualisation of the enabling law that governor Wike signed in 2021.

Justice Amadi said it was on October 12th, 2021 that Wike signed into law the Rivers State Judicial Institute Law No. 8 2021 that has a Board of Governors and an administrator to cater for the affairs of the institute.