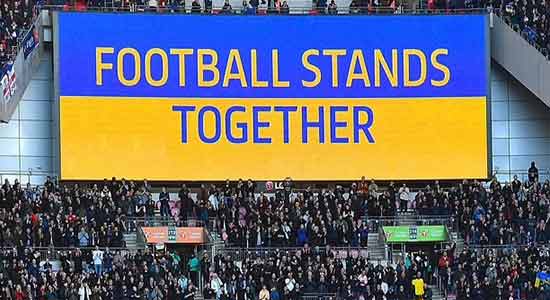 Chinese TV stations are refusing to show Premier League matches this weekend on government orders in protest at the clubs’ planned show of support for Ukraine.

Sportsmail revealed yesterday that pro-Ukraine and anti-war messages will be added into the international feed this weekend, in addition to the in-stadium activity promoting peace, prompting a backlash from China.

The Premier League had anticipated that their Russian broadcast rights holder Rambler Media may block out their messaging, which they had planned to use as a pretext to terminate the contract next week, but the reaction from China has come as a surprise.

China have denounced the economic sanctions imposed by the UK and the EU against Russia and they now plan to show further support for Vladimir Putin’s regime with streaming platform iQiyi backing out of showing this weekend’s fixtures.

The latest row with China is a blow for the Premier League as their three-year deal with iQiyi only began at the start of the season following the collapse of their previous £523million contract with PPTV, which was cancelled after the broadcaster refused to pay due to financial difficulties.

That deal was replaced by a much less lucrative one-year contract with Tencent worth just £9m-a-year before iQiyi snapped up the rights last summer.

The clubs will discuss how to respond to the China boycott next week, as well as whether to cancel all their TV contracts in Russia.

A statement from the governing body read: ‘The Premier League and our clubs wholeheartedly reject Russia’s actions and will be showing support for the people of Ukraine at all matches this weekend.

‘We call for peace and our thoughts are with all those who have been impacted.’

Meanwhile, anti-war and Ukraine-supporting banners as well as players draping the country’s flag around them as they walked out were just some of the measures taken in last weekend’s fixtures.

Ukraine internationals Oleksandr Zinchenko and Vitaliy Mykolenko shared an emotional moment prior to Saturday’s clash between Everton and Manchester City, embracing and sharing heartfelt words between them.

As the two sides came out for the match, all of Everton’s players held a Ukrainian flag over their shoulders.

Meanwhile, City’s squad all wore shirts with the words ‘NO WAR’ across the front and back of them.

Manchester United interim boss Ralf Rangnick meanwhile held a banner which had the peace sign in the middle with the word peace in numerous languages around it before kick-off in their 0-0 draw with Watford.

The German – who was said to have been behind the idea to hold the sign – was also pictured wearing a ‘NO WAR’ badge on the touchline.

Elsewhere in the Premier League, Crystal Palace displayed a banner on the big screen in Selhurst Park reading ‘WE STAND WITH UKRAINE’ alongside a picture of the Ukrainian flag before their game against Burnley.

A banner saying ‘NO WAR’ was also displayed ahead of Brighton’s match against Aston Villa, in which Matty Cash was controversially booked after celebrating his goal by displaying a t-shirt in support of a Polish team-mate caught up in the invasion of Ukraine.

Meanwhile, love hearts surrounding the word ‘Ukraine’ were displayed on the electronic advertising in the early kick-off at Elland Road, where Tottenham thrashed Leeds 4-0.

But this weekend’s coordinated measures will not be shown in China, less than a year after iQiyi Sports agreed a deal with the Premier League to become their exclusive digital broadcast partner in China until the end of the 2024-25 season in July 2021.

The Chinese government meanwhile says it will ‘continue to have normal trade co-operation’ with Russia despite the latter’s invasion of Ukraine.

China, worried about American power in Asia, has increasingly aligned its foreign policy with Russia to challenge the West.

Moreover, an intelligence report earlier this week claimed senior Chinese officials told their Russian counterparts to delay sending troops into Ukraine until after the Winter Olympics – which Beijing hosted – had finished.

The Times said the intelligence report indicated senior Chinese officials had some level of knowledge about Russia’s plans or intentions to invade Ukraine before Moscow launched the brutal operation last week.

However, China also has a good relationship with Ukraine, and values stability.

In January, President Xi Jinping marked 30 years of ties with Ukraine, hailing the ‘deepening political mutual trust’ between them.

Ukraine is a hub in the Belt and Road Initiative, a sprawling infrastructure and diplomatic undertaking that binds China closer with Europe.

It is perhaps why in a call on Friday, Xi told Putin that China ‘respects the sovereignty and territorial integrity of all nations’ and called for negotiations to calm the crisis.

China however was among the 35 countries which abstained from voting earlier this week at a UN General Assembly for a non-binding resolution that ‘demands’ Russia ‘immediately’ withdraw from Ukraine.

And there is as yet no telling indication that a cessation of hostilities is imminent, with UK Prime Minister Boris Johnson accusing Russia of ‘threatening the security of the whole of Europe’ after Putin’s troops attacked the continent’s largest nuclear power plant overnight.

It sparked a fire that raged for hours before emergency crews were eventually allowed to extinguish it as Russian soldiers seized the complex.

Mr Johnson condemned the attack as ‘reckless’ after a phone call with President Volodymyr Zelensky who branded it ‘nuclear terrorism’. Jens Stoltenberg, who is in Brussels today to meet with NATO allies, denounced attacks on all civilian infrastructure and said the fire at the plant underlined the need to end Putin’s war as soon as possible.

Russian troops had attacked the Zaporizhzhia plant in the early hours of Friday, with CCTV capturing a fierce gun battle between Putin’s men and Ukrainian defenders that sparked a fire in a six-storey training building just outside the main complex. Moscow’s men then stopped firefighters getting to the building for several hours.

Eventually, emergency crews were allowed to go in and douse the flames before Russian troops moved in an occupied the site, which provides a fifth of Ukraine’s electricity. The UN’s nuclear monitoring agency said that, fortunately, none of the site’s six reactors had been directly damaged and radiation levels remained normal. Three Ukrainian troops were killed defending the complex, Kyiv said.

Moscow has, predictably, attempted to deny responsibility for the attack, saying its forces had come under attack by Ukrainian ‘saboteurs’ while patrolling the plant, who then set fire to the building themselves.

Russia’s war against Ukraine is now entering its ninth day and shows no sign of stopping any time soon after talks between the two sides yesterday broke up without agreement.

Putin then went on TV to declare that he would keep battling for ‘total victory’ whilst spouting propaganda that Russia’s forces are not deliberately targeting civilians and that the ‘special operation’ is proceeding on time with all of its major objectives completed to schedule.