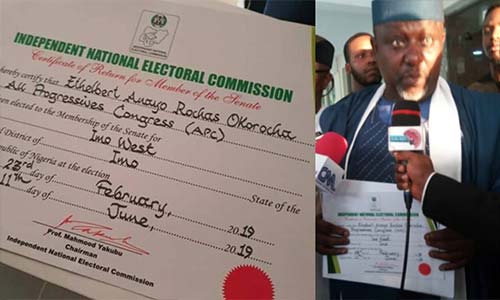 Senator Rochas Okorocha controversially got a certificate of return from the Independent National Electoral Commission (INEC) on June 11, following the order of a Federal High Court in Abuja. But getting the certificate didn’t clarify how the former Imo State governor won the Imo West Senatorial District election held on February 23.

It’s one thing to be declared the winner of an election; it’s another thing whether such declaration was uninfluenced by duress. It is interesting that INEC is interested in how election winners were declared winners. When the Returning Officer, Prof Innocent Ibeawuchi, alleged that he was forced to declare Okorocha of the All Progressives Congress (APC) the winner of the poll, the allegation stained the winner as well as the win.

Ibeawuchi had told reporters that he was held hostage from 7pm on February 24 till 11am the following day. He was quoted as saying: “I was compelled to announce the result which was inconclusive. I am a man of integrity and it is not true that the governor slapped me but I was held hostage by agents working for him. I was manhandled and I thank God I came back alive.”

Of course, the professor’s claim that he had declared Okorocha winner “under duress” calls into question how the former governor won the senatorial election. A certificate of return should not be in the hands of an election candidate whose victory was declared under duress. Democracy is not about duress.

It is striking that there were others like Okorocha whose election victories were doubtful because the returning officers involved were allegedly forced to declare them winners. INEC’s National Commissioner and Chairman of Information and Voter Education Committee, Mr Festus Okoye, said the commission had received similar reports concerning the National Assembly poll in Oju/Obi Federal Constituency in Benue State, as well as the House of Assembly elections in Niger and Akwa Ibom states.

He told reporters in Makurdi on March 22: “The commission has not given a certificate of return to anyone from Obi/Oju, the same thing with Agaye state constituency in Niger State. There is also another state constituency in Akwa Ibom. So as of today, there are four areas where declarations were made under duress and we said we will not give certificates of return to those individuals.” “Some of them are already in court,” Okoye had added.

Justice Okon Abang’s judgement on June 7 favoured Okorocha who had challenged INEC’s decision to withhold his certificate of return. The judge said:”Once a declaration of the results has been made, that decision is final and can only be reviewed by the election petition tribunal and not by INEC… Once the declaration is made under section 68(c) of the Electoral Act, INEC has become functus officio (has completed its responsibility) and INEC has no lawful authority to withhold the Certificate of Return for any reason whatsoever.”

Justice Abang’s judgement means that INEC’s refusal to issue certificates of return to the other candidates involved in cases of alleged declaration of election winners under duress is equally unlawful.

INEC highlighted “the likely consequences of this judgment for our electoral process in particular and our democracy in general.” The commission said in a statement: “Obviously, persons who seek elective offices could perceive in this judgment an irrelevance of due process and acting within the law.”

“It is not farfetched that some of them could in future disregard laid-down processes, including voting, arm themselves and mobilise thugs and compel Returning Officers to declare them elected, irrespective of the true outcomes of the elections.

“Moreover, it may become increasingly difficult for the commission to convince its officials that they are safe to carry out their legitimate functions without fear of being harassed, held to ransom or visited with bodily harm.”

A statement by the director-general of his campaign organisation, Eze Ugochukwu, accused Abang of bias, saying, “The inevitability of the judgement was obvious.” “The handling of the case from the start, left much to be desired, as issues of obvious bias were not hidden, including suspension and abridgement of rules of court, overt intimidation of defence lawyers, and harassment of same; whereas the plaintiff lawyer was allowed a field day in court. The reality is that the decision came from a court of first instance. Therefore, the decision stands to be tested at the appellate courts while the trial at the tribunal goes on.”

The controversy continues because Okorocha was declared winner in controversial circumstances. Prof Ibeawuchi’s claims that he was “compelled to announce the result which was inconclusive,” and “held hostage” and “manhandled” by agents working for Okorocha, are serious allegations. An election candidate should not benefit from such lawlessness. The court, in apparently following what the law says, should not endorse such lawlessness.

The problem of electoral interference by candidates and their backers has many shapes and sizes. If the law failed to anticipate the question of declaration of election winners under duress, then it is time to review the law. A democratic system must not tolerate the lawlessness Prof Ibeawuchi described.

The don had said he had to announce the result because he feared for his life. He claimed that the election should have been declared inconclusive because of the electoral fraud in eight Local Government Areas. According to the declared result, Okorocha polled 97,762 votes to win the election ahead of Onyereri (68,117) and All Progressive Grand Alliance’s Osita Izunaso (30,084). The question is whether the result should stand.