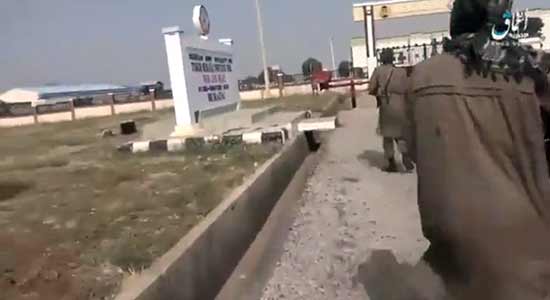 Boko Haram fighters late on Thursday attacked the Mobile Police Training School in limankara, Gwoza Local Government Area of Borno State, but the police authorities denied reports that 13 trainers were abducted by the terrorists during the attack.

Sources said Boko Haram attacked the Gwoza Mobile Police Training School with gun trucks and shot sporadically into the air before allegedly kidnapping the instructors.
“The terrorists overpowered the policemen guarding the school with ease, some instructors were abducted,” said the source.

The Borno State Commissioner of Police, Abdul Umar, yesterday confirmed the attack at the training school, but said nobody was abducted by the terrorists.

The Borno police chief said the insurgents were successfully repelled by policemen.

Umar, while addressing a press conference in Maiduguri, said: “The attention of the Borno State Police Command has been drawn to news making the rounds on social media, alleging that an undisclosed number of PMF personnel were abducted at the Police Mobile Training College, Gwoza.

“The Command wishes to categorically debunk the news, consider it as fake news, and also to inform the general public that the insurgents, who attacked the PMF training college on the 13th January, 2022 at about 2022hrs were successfully repelled by our gallant officers and men. The police did not record a single casualty or loss of firearms.

“On this note, I am using this medium to call the attention of the general public to disregard any misleading information that may likely cause panic and disturb the peace of innocent citizens who are roaming endlessly in search of greener pasture, and to assure them of our commitment, focus and determination towards bringing an end to the insurgency and other crimes and criminality in Borno State.”

The training school is located 25 kilometres from Gwoza town. It is a border town between Borno and Madagali LGA of Adamawa State.

The army institute is located in the hometown of the immediate past Chief of Army Staff and current Nigerian Ambassador to the Republic of Benin, Tukur Buratai.

In the video, the insurgents were seen firing in different directions, with no resistance from troops. They pulled down flags on the campus and torched some military vehicles.

A security source said: “Most residents have fled to Moringa, another town in Biu. The ISWAP came in large numbers shooting RPGs and anti-aircraft guns.”

Reacting to the attack, the management of Army University in Biu confirmed that two civilians lost their lives but that normalcy had since returned.

The statement read: “The terrorists who came in their numbers were met by superior firepower forcing them to retreat in disarray. Unfortunately, two civilian staff of the Institute paid the supreme price.

“Management wishes to commend troops for their gallantry during the attack and to commiserate with families of the fallen staff.

“Finally, management wishes to assure the general public that the Institute remains 100% operational as security has been beefed up in the general area.”

Four persons have been found dead, while a search for missing persons is ongoing, following an attack by ISWAP in Kautikari community, Chibok Local Government Area of Borno State yesterday.

According to residents, the insurgents invaded the area around 5pm with different of weapons and started shooting sporadically.

The terrorists thereafter set houses ablaze, and residents had to run to the bushes for safety.

“They first went to the market area as today is our market day, and they looted almost everything. After that, they set the market on fire. And then they started burning the houses. They also burnt this big church in the village, one of the villagers said.”

Another source said when the insurgents arrived, the army’s 28 task force brigade headquarters was contacted but there was no immediate response “and the attack lasted more than two hours”.

Although the village is about 17 kilometres away from the army brigade headquarters in Chibok, there is an army company under the 117 battalion stationed in Kwada, not too far from the scene of the attack.
A company is a military formation usually made up of at least 80 soldiers.

“We know it could take time for troops to mobilise from the brigade, but we were shocked that the company that was just one kilometre away didn’t move an inch to help,” the source said.

The villagers said they had also reached the air force, and a fighter jet came to the area after the insurgents had left.

Meanwhile, troops are on the ground conducting a search-and-rescue operation.

“Four dead bodies have been found, and an unknown number of women and girls have been abducted. The insurgents also took a number of tricycles belonging to the villagers,” another resident added.