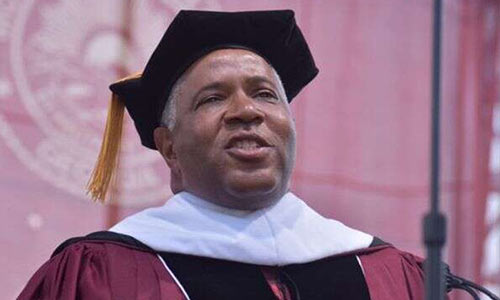 * Robert Smith’s pledge will amount to $34 milllion, school says
*In May, Smith promised to cover debt for class of 2019

Billionaire Robert Smith’s surprise pledge to pay off the student loans of Morehouse College’s class of 2019 will cost $34 million and will now include federal educational debt amassed by parents.

Students, parents and guardians received the details in an email Friday from the Atlanta school. Smith, the founder of private equity firm Vista Equity Partners, first disclosed the gift in May during the graduation ceremony.

Smith’s pledge made national headlines and focused further attention on the soaring cost of college and the debt burden faced by graduates. Student debt has emerged as a key issue among Democratic presidential candidates. Earlier this week, Weill Cornell Medicine in New York said billionaires Sanford Weill and Maurice “Hank” Greenberg will lead a $160 million effort to curb debt for qualifying medical students there.

“It is our hope that our graduates will use their newfound financial freedom to pursue their career goals, to lead and serve the community, and to remember the spirit of the gift given to them by paying it forward to support the education of future classes of Morehouse Men,” David Thomas, the school’s president, said in a statement.

New Program
Smith’s gift is the first in a new Morehouse program in which the historically black college will solicit donations made specifically to reduce or eliminate its students’ debt, either as individuals or a class. Smith’s net worth is estimated at about $6 billion, according to the Bloomberg Billionaires Index.

More than 400 borrowers will be covered by the donation for loan balances held as of Aug. 28, the school said. Six types of loans are eligible. In addition to federal and a type of Georgia state loan, certain private student loans processed through Morehouse will also be paid. The school expects to complete the disbursement to loan service providers by spring 2020.

Some 68% of Morehouse undergraduates have taken out federal loans, in keeping with the national trend, government data show. Morehouse said Friday that the student loan debt at graduation is $35,000 to $40,000, which is higher than the average for students at historically black colleges and universities.

For federal loans taken out by parents to fund a child’s college education, the government requires little underwriting. About $94 billion is outstanding, according to federal data.

At Morehouse, Smith’s commencement speech changed the financial lives of graduates and their parents.

“On behalf of the eight generations of my family that have been in this country, we’re gonna put a little fuel in your bus,” he said. “My family is going to create a grant to eliminate your student loans.