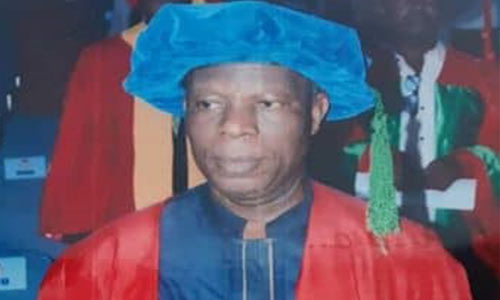 The Governor of Cross River State, Sen. Ben Ayade has dared the Academic Staff Union of Universities CRUTECH branch, by appointing new Acting Vice Chancellor (Prof. Ogar David) of the university from University of Calabar (UNICAL) against the Union’s insistence that the new Acting Vice Chancellor should come from the list of five persons sent by the institution’s Governing Council.

The Union had in an interactive chat with Journalists in Calabar at the NUJ Press Center, disclosed that, it had received vital information that the Governor was considering two names from UNICAL which they protested.

With the latest development, the union held an emergency Congress with it members to discuss the way forward. The Congress which held at ETF lecture Hall inside the varsity Friday, lasted for three hours and few minutes with Dr. Emmanuel Ettah, ASUU Chairman, CRUTECH branch gave a rundown of the emergency congress.

“ASUU had an emergency Congress on the issue bothering on the appointment of new Acting Vice Chancellor from outside the five names given by the Governing Council of the university.

“ASUU condemns in clear terms such action that breached the western miscellaneous Act 2003 and law governing the university and other Nigeria universities. ASUU is in consultation with the National body for further action to be taken on the matter. ASUU has condemned it in strong terms.”

Prof. Ogar David, a professor of Forest Economics and Management in the Faculty of Agriculture, Forestry and Wildlife Resources Management, University of Calabar, Calabar, was appointed on Thursday, 7th November, 2019 after the Academic Staff Union of Universities, ASUU ,CRUTECH branch, had given the State Government ultimatum to appoint new Ag. VC or embark on strike action.

Prof. Ogar, an indigene of Otukpuru in Bekwarra Local Government Area of Cross River State, takes over from Prof. Akon Joshua who also served as an Acting Vice Chancellor, after her tenure expired.

He is a Fulbright Scholar and Grantee of African Academy of Science. He has researched extensively on carbon stores in tropical rain forest and management among others. He has successfully supervised several Ph.Ds, MScs and undergraduates.

He taught Integrated Conservation and Development to the Postgraduate Students at Brandeis University, Massachusetts, USA. He was a Consultant to FAO/Federal Ministry of Environment, USAID/SPACE, DFID/Cross River State Forestry Commission and Ford Foundation/NEST.

He was an Adjunct Lecturer and a visiting Scholar to the Department of Forestry and Wildlife, University of Uyo, Akwa Ibom State.

Until his appointment, he was the Head of Department, Department of Forestry and wildlife Resource Management, UNICAL.

He is married to Mrs. Paulina Oshama Ogar and blessed with 3 Children.