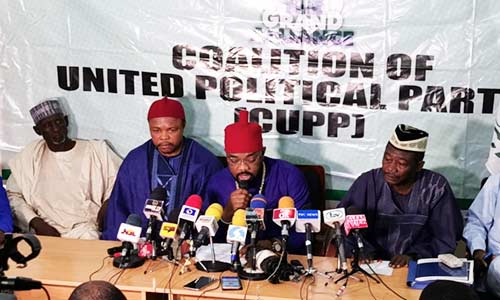 The Coalition of United Political Parties has raised the alarm over alleged manipulation in the composition of the seven-man Supreme Court panel that will hear the appeal of the presidential candidate on the Peoples Democratic Party, Alhaji Atiku Abubakar, in respect of the 2019 election.

It claimed that it has intercepted what it called “a secret list” that showed that the age long practice of picking the seven most senior Justices of the Supreme Court for the job will be jettisoned.

The coalition’s national spokesman, Imo Ugochinyere, made the allegation at a press conference in Abuja on Friday.

He said, “Countrymen, comrades and colleagues in the trenches for the battle for democracy in Nigeria; men and women who the interest of democracy excites; Solders of rule of law; Fellow Nigerians! The bad days we warned about months ago are finally with us. Those scary days where the institution of democracy and constitutional governance are raped to suit the political ambition of one man are finally upon us. We warned of a day like this when the principle of constitutional governance, free speech and right to fair and transparent judicial pronouncements will be sacrificed on the altar of the dictatorial tendencies of one man.

Today the judiciary has been finally captured, today justice is no longer about justice but about the judge you know. Today the rule of law and principle of constitutional democracy is about to be sacrificed like the biblical sacrificial lamb, not to save the nation but to keep one man in office. This if not checkmated we hurt not just our generation but generations unborn.

Painfully, we are here to inform Nigerians today that the opposition has intercepted credible intelligence, hardcore intelligence of a last assault on the institution of judiciary represented by the Supreme Court of Nigeria, where there is ongoing perfected desperate attempt by the ruling APC government working with their unrepented friends in Judiciary to constitute members of Presidential election panel with justices whose only reason of being selected is the guaranteed assurance that no matter what the law says, the President must be returned and affirmed against all known principle our constitutional governance.

We have intercepted a secret list of a 7man panel of the Justices of Supreme Court about to be announced by the Chief Justice of Nigeria in a manner that jettisoned the age long tradition of selecting the members of the panel on the order of seniority.
To ensure that nothing is left undone, the proposed screening of the nominated Justices of Supreme Court which was hitherto scheduled to take place in October 2019 have been brought forward and will be hurriedly concluded and be sent to the Senate for immediate confirmation.

Fellow Nigerians, the reason for the alleged rush to screen the proposed Justices of Supreme Court is to use them as plan B for the Presidential Election Appeal where they fail to push through the intercepted list and also not unconnected with the plan to populate the Governorship Appeal panels with these justices who are sympathetic to the ruling party with aim of giving a favourable judgment and also nullifying election of governors of opposition states.

It is no longer news to you gentlemen that the Ahmed Lawan led senate will confirm the proposed justices in an hour’s time. We have said before that the reason for the handpicking of Ahmed Lawan as the Senate President by the ruling APC is to help them execute jobs such as this.

The alleged selected Justices to sit on Atiku’s Appeal in the list we intercepted which is in violation of this age long practice of appointing the most senior Justice since 1979 are as follows:

As we speak now, arrangements have been perfected to send three names of Judges of the Federal High Court to NJC as against the Tradition of sending Two names which would have been Hon. Justice Tsoho a Christian from Benue and Hon. Justice C.M.A. Olatoregun the second in command also a Christian from Oyo State. A third name has been added for the reason that is very obvious in ensuring that a Christian does not head the Federal High Court. The third name in the list is a judge from Katsina State.

In order to see that the above plan scales through, strange and fictitious petitions have been raised against Justice Tsoho to the NJC to ensure that he never emerges as the Chief Judge of Federal High Court. The question now is who are the members of the NJC that will hear the alleged petitions? The answer is not far-fetched.

Posterity will ask, where were you standing when the resurgence of dictatorial leadership and these attempts to desecrate the judiciary and the Supreme Court were happening, where you at the barricade? Where you in league with the invaders or where you sitting quiet on the fence thinking it did not concern you? What role will be ascribed to you? Even if you did not succeed, what did you do in resistance?

Nigerians, it is time to stand shoulder to shoulder in defence of our democracy and constitutional governance and to stop these political buccaneers from desecrating the sacred institution of our judiciary.

It is not just about the opposition or the retrieval of our stolen mandate but it is about the future of our judiciary and the hope of the common man”.