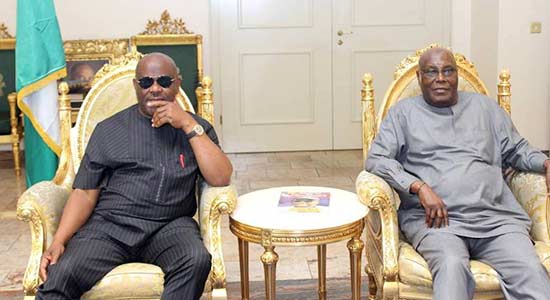 Former Vice President Atiku Abubakar, Rivers State Governor, Chief Nyesom Wike, and the Governor of Oyo State, Mr. Seyi Makinde, are set to clash in a battle for the control of the Peoples Democratic Party (PDP) as the race for the chairmanship of the main opposition party gets tougher, According to THISDAY report.

THISDAY gathered that before the alliance between Makinde and Wike collapsed, the two governors were backing the former governor of Osun State, Col. Olagunsoye Oyinlola (rtd) as the next national chairman of the party.
Investigation however revealed that Wike has now thrown his weight behind the Deputy Vice Chairman of the party in the South-south, Mr. Dan Orbih, while Atiku and Makinde are behind the chairmanship aspiration of the former governorship candidate of the party in Ondo State, Mr. Eyitayo Jegede (SAN).

On the other hand, former governors and ex-ministers in the main opposition party have thrown their weight behind Oyinlola, ahead of next month’s National Convention of the party.
This is coming as the governors elected on the platform of the PDP have called on the Ebonyi State Governor, Mr. Dave Umahi, to face his frustrations and the misrule of his party, the All Progressives Congress (APC), and bother less on how the PDP would zone the 2023 presidential ticket.

A source privy to the PDP power game told THISDAY that the Rivers State governor withdrew his support for Oyinlola because he would not want a national chairman who will be “taking instructions from Ota (referring to former President Olusegun Obasanjo) and Minna (referring to former military President, General Ibrahim Babangida (rtd)).”

“Makinde later learnt that his Rivers State counterpart was no longer on the same page with him, as he was supporting Dan Orbih against their earlier plan of installing Oyinlola. After a meeting with the former vice president, Makinde shifted his support to Jegede,” the source explained.
The intrigues on who becomes the national chairman have continued as former governors of PDP and ex-ministers are said to have backed Oyinlola.

The former governors and ex-ministers were said to have insisted that the next national chairman of the party should not emerge from a PDP-controlled state to avoid the fate suffered by the embattled National Chairman, Prince Uche Secondus, in the hands of Wike.
The former governors are said to be strongly supporting Oyinlola because his state, Osun, is currently governed by the All Progressives Congress (APC).

As the committee of the PDP for zoning of offices in the National Working Committee (NWC) begins sitting, new calculations have emerged for the zoning of the office of the leadership of the party.
It was reliably gathered that the position of the national chairman would be zoned to the entire South or North, instead of micro zoning it to a particular zone or state.

It was learnt that the 44-member zoning committee led by Governor Ifeanyi Ugwuanyi of Enugu State which commenced sitting yesterday, is faced with the difficult choice of whether the chairman of the party should come from North or South, a decision that will also have implications on where the next presidential candidate of the party for the 2023 election will come from.

A top PDP source told THISDAY that the committee headed by Ugwuanyi has decided to be fair to any of the national chairmanship aspirants from the South by ensuring that the office is open to all.
According to the source, this is to avoid any litigation against anyone claiming that his or her constitutional right has been abridged.

“It has been decided that the office of the national chairman would be thrown open and by so doing, all interested persons from the South are free to contest.
“This is mainly for the national chairmanship position. But we intend to be slightly different in approach for other offices of the NWC,” the source said.

The source added that the offices of the two deputy chairmen for the South and North would not be micro-zoned to states, but to the zones that had earlier produced them in the pre-2017 national convention.
However, it is expected that the entire work of Governor Ugwuanyi’s committee would be subject to the final ratification of the National Executive Committee (NEC) of the party.

Meanwhile, leaders of PDP in the six states in the South-west have sent a strong message to the leadership of the party on the need to zone the post of national chairman to the zone in the forthcoming national convention.

The South-west PDP leaders believe the chairmanship should be specifically zoned to the South-west to compensate for the 2017 situation in which it was unjustly denied the slot after the post had been zoned to it.
They also argued that the denial of the zone of the post of chairman in 2017 led to the dwindling fortunes of the party in the zone.