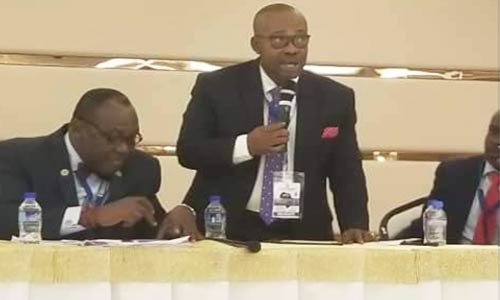 Gentlemen I do not need to bother this distinguished guests of this year’s annual conference holding on African soil about the menace of pervasive corruption on the continent.

The physical evidence of the havoc corruption has wrecked on the continent is too glaring for anyone not to see. It ranges from complete absence of basic infrastructures that makes life worth living to more serious issues of no structure for manpower development and to complete absence of hospitality structures that preserve and save lives. There is no safety and security in the continent and the direct reason is traceable to corruption of the political elites and the civil servants with their avaricious greed and appetite for stealing every resource that the continent is blessed with and their loots are stashed away in developed economies ironically.

The darkest side to this story is that the continent is the most blessed in terms of human and natural resources, yet there is no single evidence to validate this known fact. This is very sad and traumatic.

In Nigeria where I am blessed to come from, the history of corruption is as old as the country is politically. Those who know will recall that the reason or reasons for the first military coup in Nigeria and her neighbor Ghana was the allegation of corruption against the then existing governments. Those who took over from the existing governments were usually found to be more corrupt than the government they purportedly overthrew. When the States manage to attain democracy after years of severe agitation and loss of lives, the civilian governments that usually take over are no better. It is said that they are usually worse than the military governments they drove back to the barracks. In Nigeria the reason for the 1st coup was allegation of 10 per cent but now it is 90 per cent they take and leave 10 per cent for the job.

The citizens of the African continent in the circumstance seem helpless, hopeless, violated and dejected. No form of government seems to deliver to the people the true dividends of good governance the people had always yearn for. Their fruitless look towards the developed economies to come to their rescue are ignored as these developed economies are found to be culpable as they connive and collude with the political parasites in the continent to take the resources of the continent and stash away in an already developed economies. The developed economies no doubt love the free money that their economy needs badly to keep their informed citizens settled economically to avoid a terrible backlash in case of agitation or restlessness that will certainly occur whenever the people feel short changed by their leaders. There seems to be no RESPITE FOR THE CITIZEN OF THE AFRICAN CONTINENT. WHERE WILL HE GO AND WHO WILL HELP OUT?

The theme of this year’s conference is very appropriate. It is titled “Tackling contemporary issues facing the African Continent: How lawyers can drive Renaissance”.

Gentlemen we are in Liberia to proffer practical solutions to myriads of problems confronting our continent and by the grace of God we shall accomplish that before we leave Monrovia this Friday.

Corruption you will agree with me is a monster we must all dismantle in the continent. There is no region in the continental that is spared, whether South, West, North and East, no country is free from the debilitating effect of pervasive corruption that have befallen the continent unfortunately.

My approach will be from various angle, I shall be brief, it is a promise.

How do we systematically dismantle corruption in the continent?

I put it straightaway that it is indeed possible to fight corruption successfully with the right knowledge, patience, and commitment to transparency. However we must first of all understand various ways acts of corruption are perpetuated in the various countries in the continent. Take Nigeria for instance, one of the most commonest ways the political elites empty the treasury is through the provision of security vote for the executives. This practice is inherited from the military regime of President Ibrahim Babaginda and has continued even after we attained democratic rule in the country. There is no provision for it anywhere in the constitution, yet it has become the norm even by the subsequent government that promised us change. It is a reprehensible practice of misappropriating and stealing huge sums of public money under the guise of enhancing national security. Its practice is embedded in ambiguity and utmost secrecy associated with the concept of national security which has helped to institutionalize it. However the beneficiaries are not accountable to anyone on the use and misuse of the funds that runs into several billions of Naira monthly. One former State governor of my my State, Abia in Nigeria was taking about 1.1billion every month as security votes, excluding other unaccounted allowances and perks of office running into several millions monthly.

This is just one State, this practice is all over the 36 States of the federation, mind you the presidency takes it own which no one knows how much, the local government chairmen are heavily implicated in the same act, and I heard also that some ministers used to take security votes. What I am not sure is whether the system has stopped or is continuing under the present dispensation. Gentlemen and ladies, you can imagine the damage such opaque practice is causing to the economy of a country that lacks basic drugs used in in public hospitals.

PRESCRIPTION: This security votes is an evil practice started by the military, maybe for reason that is associated with the form of government that cannot distinguish between public interest and private interest. If it was accepted under dictatorship regimes, this practice has no place under democracy. It is advised that we should use the funds that are stolen away under the guise of security votes to finance the police and other security agencies sufficiently to secure both our internal and external territories effectively.

BOGUS AND OVER INVOICED CONTRACTS.

Another method the civil servants and political class defraud the government is through fake and over invoiced contracts. In a report published recently in Nigeria, arrests were made of some suspects who awarded fictitious arms contract to fight Boko Haram worth some 2 billion dollars. This contract was awarded between 2011 and 2015. It was reported that over 7 billion Naira has been so far recovered from the indicted companies and individuals. Over invoicing is another fraudulent practice prevalent in the continent. Take for instance 2 horse power air conditioner that goes for 180 thousand Naira is awarded for 1 million or sometimes 2 million per one as a government contract. If this is not madness, I need another definition of it. Why can’t this contract be awarded for 200k or at worst 220k? Why must the person awarding the contract be looking for millions of Naira to make personally in all government contract he or she awards?( Please narrate the story of the Pzifer pharmacist told you about Abuja Hospital)

WEAKNESS OR TOTAL ABSENCE OF INSTITUTIONS

The weakness of institutions like the legislature and the judiciary that would have checked the acts of corruption in the system is devastating. These institutions are deliberately weakened to make it easy for corruption to thrive in the continent. Strong and independent judiciary is a panacea to pervasive acts of corruption, alas the judiciary lacks autonomy and have been subdued that it cannot and will not muster the necessary courage to nib it in the bud. The legislative arm of government that should checkmate the abuse of power of the executive especially in over sight functions are also weakened and pocketed by the executive that instead of checkmating the executive, it colludes with them for its selfish reasons to short change the people by turning blind eye to fraudulent practices happening at the other arms of government. It is even said that corruption is institutionalized at the legislative arm of government. They collect bogus salaries and allowances yet they give little or nothing in terms of return in legislation and over sight functions.

PRESCRIPTION: Strengthen the institutions and ensure their independence to curb the prevalent corrupt practices in the continent. If we really want to stop corruption and its debilitating effect on the continent we need to go extra mile to build and strengthen our institutions that will put a stop to destructive acts of corruption that have kept us backwards.

It is essential that Africa must fight corruption systematically and ensure long term stability in the continent. We are fortunate to now have technology even though borrowed that enables us to build electronic platforms to manage government finances, biometric systems to bring integrity to our personnel and government payment systems and web-based platforms to provide transparency of government finances. We should deploy emerging technologies to underpin our contract negotiations and procurement systems, a huge source of corruption and leakage in many countries in Africa.

We must also create an environment that enables strong and accountable civil society organizations that provide an oversight on government businesses. Such strong and independent institutions have salutary effect and they exert the necessary pressure on politicians even at the highest levels to act.

Publications of information like monthly allocations to the various tiers of government in the newspapers and other media platforms go a long way in help to reduce corruption in the system. Firstly it is an act of transparency, secondly it helps internal and external audit system to have adequate information to work with to rid the continent of corruption and corrupt practices. Secrecy encourages corruption but transparency and making information open and available goes a step further to nib it in the bud. (Give example of the Okonjo Iweala act of publishing which has been stopped)

Finally it is important we re-emphasize the fact that corruption is a gross violation of citizen’s rights and needs to be treated as such. Effective and stringent judicial system must be encouraged to deal ruthlessly with offenders and where cases of corruption are properly made out, proceeds of crime must be confiscated and used to develop the deficit basic infrastructures in the country and develop the economy including creating jobs for the teeming populace. Africa needs to focus its anti- corruption fight on long term, high return institution building activities, coupled with the justice infrastructure and political will to hold those who transgress accountable.

Much as we insist that those who are corrupt must be arrested, tried and sentenced if found guilty, I think that our attention should be more concentrated on measures that will actually reduce if not stopped it completely. (Give Russian Example).

If we do this and more which time constraint has not allowed me to point out here, Africa will be on its way to the renaissance we all seek for her. Note that quality leadership and the legal profession all have a pivotal role to play in this. Time to begin is NOW.

THANK YOU FOR YOUR TIME.

This paper was delivered at the Ongoing African Bar Association, Taking place at Monrovia, Liberia.