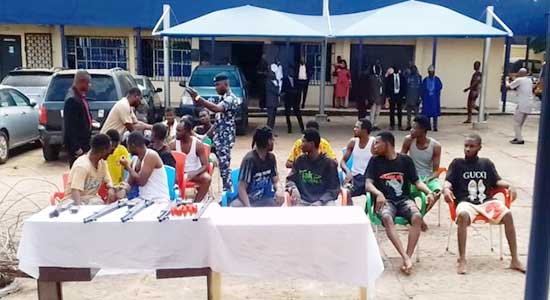 The Command also recovered a total of ten vehicles, comprising those snatched at gunpoint from their owners and those recovered at crime scenes from the suspects, including, among other exhibits.

The State Commissioner of Police, CP Echeng Echeng, who parading the suspects at the State CID in Amawbia on Thursday, revealed that some of the suspects were involved in the recent murder of a staff of the Independent National Electoral Commission (INEC) at Isuaniocha, in Awka North Local Government Area of the state.

Also paraded were suspected vandals of the property of the Enugu Electricity Distribution Company (EEDC), as well as some suspected robbers, kidnappers and car snatchers who specialize in robbing people of their hard-earned money, cars and other belongings at gunpoint, which they eventually resell to unsuspecting members of the society at the cheapest prices.

Parading the suspects, CP Echeng, who gave details of their crimes, revealed that one of the recovered vehicles was a Venza snatched from a victim in October and recently used to attack a security checkpoint at Isuofia, Aguata Local Government Area of the state.

He said, “Gentlemen of the press, on 12/11/2022, a Venza jeep with Reg No. KRD 344 BT Lagos, was intercepted, fleeing the scene where they attacked Army patrol officers and killed one of them at Isuiofia in Aguata L.G.A. During the gunfire, four ESN/IPOB militants were neutralized and two walkie talkies were recovered in the vehicle.

It may interest you to know that the Venza jeep was earlier reported snatched at gunpoint on 20th October, 2022 in Igbo-Ukwu Area. The owner of the vehicle is around to narrate her ordeal.

“These criminals, snatch vehicles at gun points and use the vehicles to perpetrate their act of attack on security personnel within and outside Anambra state.

“Furthermore, on 5th November, 2022, at about 0430hrs, through actionable intelligence Police operatives attached to Ogidi Division, stormed the house of suspected kidnapper, one Nwozor Chukwuka ‘m’, aged 38yrs old and arrested him. Consequent upon interrogation, the suspect confessed to the offence of kidnapping, armed robbery and car snatching. He also disclosed his other gang members to include one Ifeanyi Mgboma ‘m’ of Nteje but resides at Umuoji in Idemili North L.G.A. of Anambra State. The arrested suspect then took detectives to Ifeanyi Mbgoma’s house at Umuoji, where three stolen vehicles were kept, and recovered them. The recovered vehicles are: one Avalon car (dark-ash in colour without registration number); Lexus 330 SUV (dark-ash in colour without registration number), and Toyota Corolla (dark-ash in colour without registration number). However, Ifeanyi Mgboma is still at large, and effort is on top gear to bring him to justice.

“Further to the above, detectives were led by Nwozor Chukwube to one Ejiofor Anene’s workshop at Awkuzu in Oyi L.G.A. of Anambra State, where stolen cars are normally kept for repairs and repainting, prior to their being sold to unsuspecting members of the public. Other vehicles recovered at the said workshop include: one Toyota Corolla, golden colour without registration number, one Honda Pilot, black in colour without registration number.

“Similarly, on 7th November, 2022 at about 0752hrs, one Mr. Ofoegbu Bernard ‘m’ of Nkwelle Ezunaka of Oyi L.G.A. of Anambra State reported that on 6th November, 2022 at about 1930hrs, while driving his Toyota Corolla car with Reg No. ABJ 541 DU (ash in colour) along Onitsha/Enugu Expressway, by Nkpor Down Flyover; armed men numbering about six double crossed him and made away with his vehicle, GSM phones, Diamond Bank ATM card and his other belongings.

“That same date, at about 1430hrs, through data analysis, tracking and intelligence, the vehicle was tracked down to a Hotel in Awada Area, and two suspects were arrested. The two suspects are Success Asiegbu ‘m’, aged 26yrs of Okpanam Road, Asaba; and Chiemerie Okeke ‘m’, 28yrs of No. 6 Oga street, Coker Asaba, both in Delta State. The two suspects, upon interrogation confessed to the crimes of armed robbery, kidnapping and car snatching. The vehicle in question was recovered to the station together with the Diamond Bank ATM card belonging to the victim which was recovered from one of the suspects. Consequent upon further rigorous interrogation, one of the suspects opened up and led detectives to Omogba Phase II where one Toyota Camry 2.4 model was also recovered.

“On the strength of further interrogation on 10th November, 2022 at about 0415hrs, one of the principal suspects, Emeka Okeke ‘m’, aged 28yrs (alias Akpa), was arrested at Mgbachu village Nkpor. Suspect confessed to the crime and his confession led to the arrest of one Nzube Ikezue ‘m’, aged 31yrs of Akuzor village, Nkpor, who was arrested as one of the receivers of stolen vehicles. The aforesaid receiver led detectives to Asaba in Delta State, and one Toyota Corolla Saloon car, light-green in colour without registration number was recovered and one painter, Habib Adedigba who was in possession of the stolen vehicle was arrested for further interrogation.

“It is worthy of note to put on record that one of the suspects, Success Asiegbu ‘m’ confessed to have used the ATM card of one of the victims to withdraw the sum of one hundred and fifty thousand naira, having compelled the victim to disclose his PIN number. The owner of one of the recovered Toyota Corolla cars by name Anthony Uchenna Okafor ‘m’ aged 32yrs of Umueze village Umunachi was killed by the assailants on 30th October, 2022 at about 2000hrs while returning home from Nkpor.

“Gentlemen of the press, on another development, the police on 28th September, 2022 at about 0200hrs one Mrs. Theresa Okeke ‘f’ aged 54yrs, an Accountant with National Population Commission, Awka, was gruesomely murdered in her residence at No. 4 Umuziocha, Awka. Immediately the case was reported, her step son, Ekenedilichukwu Okeke ‘m’, aged 20yrs who slept in the same house with the deceased was arrested for interrogation. He claimed that armed robbers stormed their residence and killed his step mother. However, after an intelligence-based interrogation, he eventually confessed to the crime and named his accomplices.

“Detectives from State CID Awka swiftly mobilized in search of the accomplices which led to the arrest of three additional suspects, namely; Peter Jideofor ‘m’ (a.k.a Rider), aged 23yrs; Chukwuemeka Christopher ‘m’, aged 29yrs; and Chisom Emmanuel Dike ‘m’, aged 22yrs. They have all confessed to the crime and disclosed that it was the deceased’s step son, Ekenedilichukwu Okeke ‘m’ who contracted them to come and kill the her to enable them transfer the sum of one million naira from her account, having known her phone password. The suspects will soon be charged to court.

On the arrest of the two suspected killers of a 43-year-old INEC staff, Mr. Osita Duruoha, who was murdered on September 28, 2022 at Isuaniocha; the Police Commissioner explained that the 2-man gang of armed robbers specialize in snatching shuttle buses around Ifite-Awka.

He said, “They pretended to be passengers and boarded a shuttle bus belonging and driven by an INEC Staff, ‘m’ 43yrs. The duo boarded the shuttle bus at Ifite on the pretence that they were going to Isu-Anaocha on an agreed fare of three thousand naira. On getting to Urum/Isu-anaocha road which is an Isolated area the duo ordered the driver to stop and one of the suspects, Chinedu Malachi who was seated behind the driver used a rope to strangulate the driver from behind. Thereafter dumped the corpse of the deceased in a nearby bush and drove the shuttle bus to Enugu where they wanted to sell it.

The Police Commissioner also revealed that his men, in collaboration with the officers of the National Drug Law Enforcement Agency (NDLEA), arrested one Godwin Nwode living at Onitsha, from whom some quantities of drugs pump action guns, one double gun, 25 live cartridges, 13 gun bags, and 3 cartridges bags were recovered.

Similarly, he said the Command collaborated with the vigilante groups of the state to arrest four suspects for vandalizing and stealing of EEDC equipments at Nsugbe town and Nza village in Ozubulu areas; adding that the suspect usually steal and sell those electrical equipments at a giveaway prices.

The CP, while warning criminal elements to vacate the state, law abiding citizens should continue to go about their lawful businesses and give prompt information about criminal activities within their domain to the law enforcement agencies. He reassured of the Command’s commitment to regularly provide airtight security in the state, most especially in this Yuletide and political season.

When interviewed, some of the suspects, Ekenedilichukwu Okeke and Peter Jideofor, arrested in connection with the murder of the 54-year-old staff of the National Population Commission said they did not intend to kill her, but only tied her arms and covered her mouth, so they would be able to transfer ₦1,000,000 from her account for the school fees of the step son (who was still hoping to gain admission), only for them to notice that she had stopped breathing after a short while.

On the other hand, one of the suspects, Chinedu Malachi, arrested in connection with the murder of an INEC staff at Isuaniocha said they killed him with the aim of selling his shuttle bus and sharing the money, only for them to be arrested after a short while.