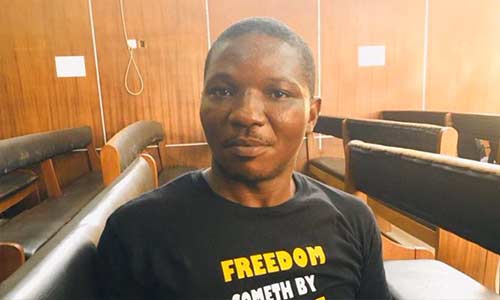 In his ruling, the presiding judge, Justice Simon Amobeda said the defendant had shown “exceptional circumstances” to permit the court to exercise its discretion and admit him to bail.

One of the sureties must be a civil servant with either the state or Federal Government on Grade Level 13 or above while the other must be a “close relative with a verifiable address,” Justice Amobeda ruled.

Also, both sureties are expected to depose to an affidavit and provide two passport photographs.

The defense team was for the first time comprised of more than one lawyer with E. E. Osim, Oliver Osang and Assam Assam Jnr, who represented the Abuja branch of the Nigerian Bar Association, all entering appearances.

The matter was stood down for a few minutes after it was called due to the absence of the prosecution counsel, Dennis Tarhemba.

However, another prosecutor from the Cross River State Police command, C. I. Eze, entered appearance for the prosecution.

Brought pursuant to Section 35 of the 1999 constitution of the Federal Republic of Nigeria as amended, the motion was supported by an eight paragraph affidavit deposed to by one Mr Emmanuel Otona.

The motion had three annexures and was accompanied by a written address, which the defense adopted as part of the oral argument to support the application.

In his oral submission, Osim said the defense was in receipt of the prosecution’s counter affidavit dated January 17, 2020 and drew the court’s attention to paragraph 6, which he said “goes into the issue that the court will entertain in the main trial.”

He submitted that the counter affidavit did not contradict the proof in the annexures of the application and urged the court to grant the defendant bail on self-recognition.

However, Eze who relied on all eight paragraphs in the counter affidavit deposed to by the investigating police officer, Ihezuo Ibe, and adopted the written address as part of the prosecution’s oral argument, submitted that the defendant/applicant had not shown exceptional circumstances in order for the court to admit him to bail.

In his ruling, Justice Amobeda held that bail pending trial remained a right enshrined in the constitution.

He held that the counter affidavit of the prosecution was “bare” as the deponent is a police officer, who “has no expertise in medicine.”

He ruled that the “mere claim” of the prosecution that the defendant/applicant was not sick was not enough to discountenance the material evidence placed before the court by the defense.

Odok, who arrived court in company with two correctional officers sporting a blue jean, slippers and a black shirt with the inscription “Freedom Cometh By Struggle”, was arrested at his Abuja residence on September 26, 2019 and spent 26 days in police custody before he was arraigned on October 22, 2019 on two charges bordering on terrorism and cybercrime.

He pleaded not guilty and was remanded at the Medium Security Custodial Center of the Nigerian Correctional Service where he has spent 91 days so far.

He risks a death sentence if convicted of the charges.

The matter was adjourned until January 28 and 29 for trial.

His wife had told journalists that his arrest was a plot hatched by the Cross River State Government to silence him – an allegation the state denies.