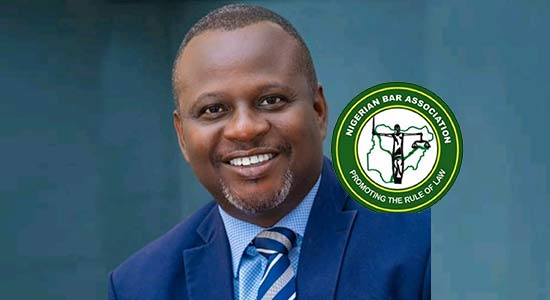 The Akure Branch of the Nigerian Bar Association (NBA), has faulted the Former AG of Ondo for carrying on the investigation on Olupelumi Fagboyegun allegations without hearing from the Chief Judge, Hon. Justice Akeredolu.

The branch said they will uphold the rule of law and the sanity of the judiciary in Ondo state, as the Judiciary is seen to be the hope of a common man.

The branch made this disclosure on Friday while reacting to the viral video where one Olupelumi Fagboyegun, has accused the Chief Judge of Ondo of high handedness and abuse of office

In a statement signed by the chairman, Rotimi Olorunfemi Esq., and secretary, Ademola Ikujuni Esq, made available to TheNigerialawyer, the branch noted that they would not close their eyes to the fact that the 1999 Constitution (as Amended) has not only given the judiciary independence but has also restricted the ease with which political office holders interfere with the Judiciary.

ALLEGATION OF PERVASION OF THE COURSE OF JUSTICE MADE BY ONE OLUPELUMI FAGBOYEGUN AGAINST THE HON. CHIEF JUDGE OF ONDO STATE IN A VIRAL VIDEO VIS-A-VIS THE HON. ATTORNEY-GENERAL AND COMMISSIONER FOR JUSTICE’S REPORT OF INVESTIGATION ON THE MATTER – OUR POSITION

On the 15th day of February, 2021 the social media space was awashed with a video clip in which one Mr. Olupelumi Fagboyegun made allegations of pervasion of the course of justice against the person of the Hon. Chief Judge of Ondo State, Hon. Justice O.O Akeredolu. In the said video, Mr Fagboyegun alleged amongst others that he has been facing trial for an offence that attracts only 1-year imprisonment for upward of 3 years. Further that the Ondo State Chief Judge was using her office to pervert the course of justice which has kept him in ‘open remand’ for three years and therefore soliciting the assistance of well-meaning Nigerians to “help him”.

Immediately, the attention of the Chairman of the Akure Branch of the NBA was drawn to the video, he forwarded same to the Hon. Chief Judge and the Chief Registrar of the Ondo State High Court requesting for a quick  reaction by the Ondo State Judiciary to the allegations of Mr. Fagboyegun in the said video. He also followed the WhatsApp request with a visit to the office of Chief Registrar who assured him that a team had been dispatched to the Chief Magistrate Court in Owo to ascertain the correct position of the case.

At the level of the Bar, we also launched an independent investigation into the allegation of Mr Fagboyegun to get an informed opinion.  In furtherance of this, we spoke with  the Chairman of the Owo Branch of the NBA under whose purview the whole matter happened requesting him to interview the counsel to  Mr. Fagboyegun, to  know if the said Mr. Fagboyegun was under any form of remand or incarceration or if the deposition of his international passport was a bail condition.

We also spoke with the Director of Public Prosecution and sought her position on the case and she informed us that her office came into the  matter sometime in July 2019 and that the Hon. Attorney General was on top of the situation.

What aroused our curiosity in the said video were:

(2) Why the case had lingered in court for 3 years, and

(3) The involvement of the person of the Hon. Chief Judge in the case.

On these, our investigation revealed that the said Mr. Fagboyegun was not in any form of remand, detention or incarceration as he was granted bail on the same he was arraigned in court on very liberal terms which was perfected the same day.  The meaning of “open remand” therefore still remains a term in legal jurisprudence as his international travelling document was not confiscated by the court as part of his bail conditions.

His prosecution which began in March 2018 was ongoing till sometimes in July 2019 when the office of the DPP took over the prosecution from the police on the instruction on the office of the Attorney General of the State. The reason for the interest of the AG/DPP to take over prosecution of such a simple matter is however curious though without prejudice to the constitutional power of the AG to take over prosecution of ANY case in any court in the State. On taking over the prosecution of the case, Mr Fagboyegun was allowed to continue on his former bail conditions even after the amendment of charges against him by the DPP.

Reason for the delayed trial from our findings was discovered to be due to the fact that:

On the involvement of the Hon. Chief Judge of Ondo State, Hon Justice O.O Akeredolu, it is a fact that Hon. Justice Akeredolu is a member of the Fagboyegun family of which Mr. Olupelumi Fagboyegun  is laying sonship of. That Hon Justice Akeredolu had been involved in family discussions on the paternity issue, which dispute remotely led to the present criminal prosecution of Mr. Fagboyegun. The prosecution of Mr Fagboyegun was however as a result of his alleged invasion of the Family Farm, known as Jof Ideal Farms at Owo which was under lease at the time of the invasion to one Alhaji Ibrahim Abdullahi.

That the said Alhaji Ibrahim Abdullahi was and remains the primary complainant in the case and not Hon. Justice O.O Akeredolu or the Fagboyegun Family. That the Hon. Chief Judge had no DIRECT  interference with the prosecution of  the case at the Magistrate Court, Owo, as the delay in trial was apparently  due to the facts briefly enumerated above.

On the report of the investigation by the Office of AG Ondo State on this matter which was made available to the public yesterday 18th day of February 2021, we state as follows that:

In conclusion, the Akure Bar is of view that the AG has wisely rested the controversy generated by the case and the viral video clip by discontinuing forthwith the criminal prosecution of Mr. Olupelumi Fagboyegun.

The Bar, therefore, urges all parties in this matter to thread solidly on the path of constitutionalism as anything short of this will seriously erode and/or eliminate the little confidence the public still has in the judicial system.

As lawyers, all our actions in and outside the courts, more particularly in public sphere,  must be guided by law and mutual respect for all constitutional offices and the almighty 1999 Constitution of the Federal Republic of Nigeria (as amended).