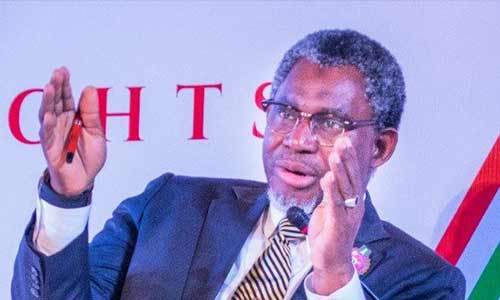 The Federal Government, yesterday, blamed the outbreak of COVID-19, and now the Russian/Ukrainian conflict, for its inability to meet its earlier target of delivering the Ajaokuta Steel Rolling Mill project this year.

The Minister of Mines and Steel, Olamilekan Adegbite, disclosed this during the weekly Ministerial Briefing organised by the Presidential Communication Team, held at the Presidential Villa, Abuja.

The minister revealed that President Muhammadu Buhari had approved the release of $2million for the conduct of a technical audit of the mill as demanded by Russia. He said the money is still intact as it has not been paid out.

According to him, the government had, before the pandemic, successfully convinced Russia to complete the steel facility, but could not proceed with the negotiations due to force-majeure.

He further disclosed that the government moved to continue the negotiations with Russia after the lockdown, but progress was stalled again due to the conflict between the country and Ukraine.

He, however, noted that the government would initiate irreversible processes to ensure the resumption and eventual completion of the steel facility beyond the Buhari administration.

He said a Suadi Arabian group working with some Nigerians has undertaken to produce the technical audit without cost to the country.

“I told you Ajaokuta, by the grace of God, we will start an irreversible process. The problem with Ajaokuta is actually what we call force majeure. Nobody thought of the Covid because the plan was deliver Ajaokuta this year 2022.

“And I’ve said it before, when we came back from Russia. Yes, I went to the public and said, look we will deliver Ajaokuta before the end of this tenure. And I pray that I’ll have a chance to go back and apologize and explain what happened to the people before I leave office.

“Yes, it’s through no fault of ours. Everybody was gun go. We were ready to go. Unfortunately, Covid became a force majeure”, he explained.

Adegbite remarked that the country is blessed with huge bitumen deposits that have been left untapped while the one required for road construction is being imported.

He said his ministry has finalised plans to auction the deposits for processing to serve Nigerian road construction needs, reduce cost and create employment.

“We are going to auction now for bitumen in June, this will bring a lot of money. A lot of foreign companies are showing interest in our bitumen. This is even better than bitumen is found in Canada.

“They want to participate in our bitumen project that will create jobs, give value to government, and of course, will also help when it comes to our projects, road construction”, he said.

Fielding a question on gold mining in Zamfara State, the Minister said government had halted mining activities in the area because the conflict went beyond mining.

“If we hear any mining happening in any nook and cranny, we move in there and dislodge them. Those that are arrested, we confiscate their equipment and they are prosecuted”, he said.

The Minister disclosed that government is reviewing the Mining Act (2007), to bring it up to date, saying that 44 solid minerals have been found in over 500 locations in Nigeria with many in commercial quantities.

According to him, the mineral deposits are broadly categorised according to their uses, into five groups including Industrial minerals such as baryte, kaolin, gypsum, feldspar, limestone; Energy minerals such as coal, bitumen, lignite, uranium; Metallic ore minerals such as gold, cassiterite, columbite, iron ore, lead- zinc, copper; Construction minerals such as granite, laterite, sand, and Precious stones such as sapphire, tourmaline, emerald, topaz, amethyst, garnet and some others.

On the reform in the sector, Adegbite stated that seven minerals have been designated as strategic to unlock the enormous potential in the sector.

“They are coal, iron ore, bitumen, gold, limestone, lead-zinc and barite. We have adopted a forward-thinking approach, by developing the strategic minerals of the future. These include minor metals such as titanium and cobalt.

While revealing that government is looking for investors to process minerals, he said three companies have been granted licenses to refine gold, adding that four tranche of gold cargo ha been shipped out for export from Segilola in Osun State.

He also revealed that the country has attained self-sufficiency in Barite production and would no longer need to import from October 2022.

The Minister explained that the Buhari administration is doing everything within it’s powers to upgrade the sector.