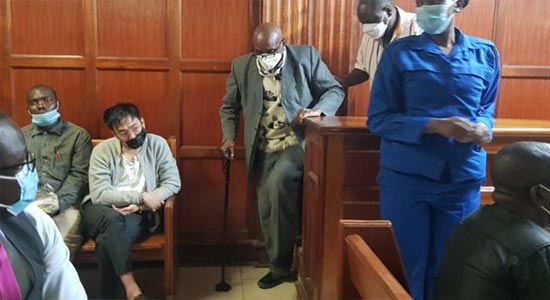 A 69-year-old man identified as John Edward Njeru has been handed a 1-day jail term for assaulting a lawyer during a cross-examination session inside a courtroom.

The former Director of Operations in Kenya Police Service reportedly left the lawyer, Alex Kimani, with “serious injuries” after landing a blow on his abdomen. He was said to have been angry that Kimani was asking him too many questions in a case where he was the witness.

The case is said to be between an elderly man who accused a businessman, Gabriel Njoroge Mbuthia of allegedly defrauding him by forging a certificate of lease for a land in Nanyuki Municipality. The businessman is alleged to have committed the offence on July 21, 2009.

It was gathered that the incident occurred after the lawyer asked the court to allow him get closer to the witness who was seated to show him some documents. The court was forced to order for detention of the witness as the lawyer went to the hospital for medical check up.

His colleague, Waweru Benson who appeared before the court on Tuesday September 28, told Senior Principal magistrate Bernard Ochoi that Kimani could not appear in court since he was still experiencing serious abdominal pain.

“After the yesterday’s incident, my colleague (Kimani) developed a sharp pain in his abdomen. He visited the hospital was advised by the doctor to undergo a scan this morning to ascertain the cause of the pain.

“The accused person has a right of presentation and no one can stop that representation either by word of mouth or assault as it happened yesterday. No one is above the law. I have information that the complainant used abusive language to a prosecutor in a previous court.”

Benson urged the prosecution to join the defence in condemning the action and also asked the court to issue an order for detention of Njeru for more days until the matter is reported to the police.

The Magistrate however said;

“Following the unfortunate incident that happened yesterday that a witness physically confronted a lawyer, I ordered the witness to be detained for one day. I take notice that the lawyer is unwell due to the incident and I urge him to report to the nearest police station for officers to carry out investigations and file a report in court.

“The action is totally unacceptable in this court and it’s seriously condemned.”