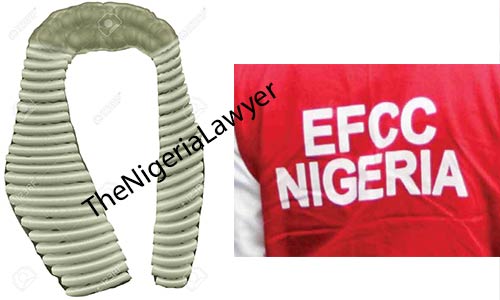 The Federal High court in Lagos has awarded the sum of 5 million Naira against  Economic And Financial Crimes Commission (EFCC)  for the unlawful arrest, detention and the freezing of the Account of one Mr Charles Aiyeni for standing surety to Chief Jerome Itepu, a friend of his who was arrested and released on bail to him.

The Applicant through his lawyer, Mr J.A.K Akhigbe, told the court that on the 10th of December, 2018, he went to his bank to withdraw money but could not because restriction had been placed on his account by the Respondent. He went to the office of the Respondent for an explanation, only to be arrested and told that his account was placed on No debit Notice because Chief Jerome Itepu he stood surety for has not honored their further invitations. He was thrown into their cell on the 11th of December, 2018 and kept incommunicado for 24 hours. All attempt to release him on administrative bail failed. He was eventually released on bail on 22nd December, 2018 after 12 days of detention. The Applicant said that even after his release on bail, his bank account remained frozen till date and the Respondent told him that his account will remain frozen until he produced Chief Jerome Itepu.

In a landmark judgement the Federal High Court presided over by Hon Justice I.N Oweibo held as follows:

1. The arrest, detention of the Applicant because he could not produce a suspect he stood surety for is NOT A CRIME KNOWN TO LAW.

2. The charge of Obstructing the Cause of Justice for his failure to produce the suspect was an offence  not made out in the  exhibits that the Respondent attached on their counter affidavit.

3. The only liability for the Applicant for failure to produce the suspect is to show cause or forfeit the sum of 18 million Naira bail bond.

4.  The Arrest, detention  of the Applicant was not justified and therefore unlawful.

5. The non production of any valid court order authorizing the freezing of the Applicant’s bank account makes it unlawful and unconstitutional.