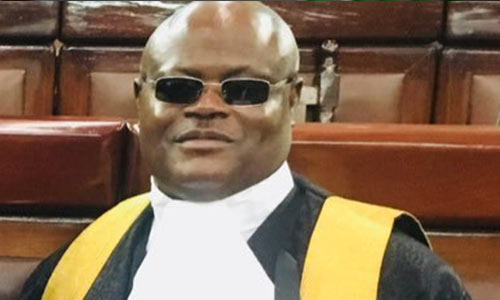 Senior Advocate of Nigeria, Chief Yomi Alliyu, has volunteered to defend the young girl from Queen’s College who was allegedly assaulted by a security officer for fixing eyelashes.

The learned silk in an open letter which he addressed to ladies, condemned the act, and stated that it was wrong filming the girl who was but an underage. According to him, they had succeeded by their acts in creating a life long scar on the girl child which if not properly handled may cause eternal damnation in the life of this young heart. He also added that the negative tag from this may affect how she is treated throughout her life, and she might need a psychiatrist working hand in hand with a seasoned psychologist to bring her back to her feet and womanhood.

“I watched with blurry eyes the scene brought to play by security men at Queens College, Lagos. I bled inside me when I saw a young girl taking cover on her mum’s shoulder having her head pull back forcefully and/or violently by a Security man with the intention of showing her eyelashes to the world by filming an underage girl.

“This is reprehensible and should be condemned by all right-thinking people. This is punishment carried to the extreme. Even if she had committed ARMED ROBBERY the law does NOT allow filming of underage for any criminal offence!.

“For crying out loud, what crime under the Law is wearing of eyelashes? Is it indecent exposure of body by a student to warrant bullying, jeering, exposure to public odium and ridicule by half-educated security outfit of Queens College, Lagos, who not only filmed but mounted the video on the internet and ensuring that it went viral.

“They had succeeded by their acts in creating a life long scar on the girl child which if not properly handled may cause eternal damnation in the life of this young heart. The negative tag from this may affect how she is treated throughout her life and she might need a psychiatrist working hand in hand with a seasoned psychologist to bring her back to her feet and womanhood,” he said.

Speaking further, he said that this is the type of situation the law seeks to protect not only for a girl child but all underage, adding that, a child should not be made to carry the tag of malfeasance and/or crime throughout her life. “I refer you to various laws which include but not limited to Children and Young Persons Act/Law; Protection of Children Act/Law and various international treaties on protection of girl child,” he said.

“Today has been declared by the United Nations as International Day for the Protection of Women and Girls. This young girl has been molested, ridiculed and exposed to public odium by the authorities of Queens College through their security outfit.

“I#standforJusticeforQueensCollegeGirlChild and hereby request to be connected to her parents for her defense before the panel set up by the school even though they have been caught up by Nemo judex in causa Sua. Having created the odium and eternal moral wound they cannot in law sit in judgment over the girl!

“Thanks for sparing time to read my submission and in anticipation of your connecting me with the parents of the girl child for her defense before the panel and if possible Court.

“They have brought the issue to public glare. This matter should be properly addressed to protect girl child not only in QC but throughout the civilized society. Be that as it may, I wish you a very happy international day against violence against women and girls,” he added.