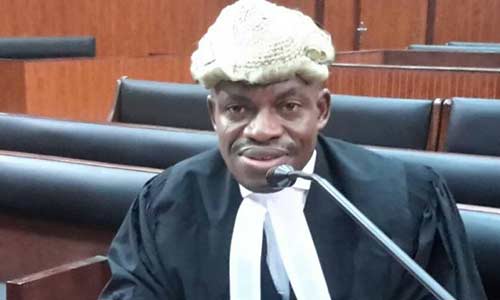 The Association of Lawyers With Disabilities in Nigeria (ALDIN) has called on President Muhammadu Buhari to Implement the Discrimination Against Persons with Disabilities (Prohibition) Act, 2018 which he signed on January 23, 2019 following nine years of relentless advocacy by disability rights activists in the country.

The call was made in a press statement made available to TheNigeraLawyer (TNL) dated 3rd of December, 2019 and signed by both its Chairman (Daniel Amaechi Onwe Esq., Notary Public) and its General Secretary. (Gaius Ogan Esq).

The said law prohibits discrimination on the basis of disability and imposes sanctions including fines and prison sentences on those who contravene it. It also stipulates a five-year transitional period for modifying public buildings, structures and automobiles to make them accessible and usable for people with disabilities.

ALDIN applauded President Buhari for enacting the Discrimination against Persons with Disabilities (Prohibition) Act after repeated failures of previous Presidents to assent to the Bill for the said Act. To them legislation has become the most veritable instrument for correcting the disadvantaged stead of persons with disabilities and equalizing their opportunities. They cautioned however, that:

“Having signed into existence the said law, it remains for it to be demonstrated that the said assent of the said disability bill is not merely intended to score political point, but rather to positively change the destinies of persons with disabilities in Nigeria forever. Therefore, it is expected that the President takes the necessary step towards the implantation of the Act, such as the immediate constitution of the National Commission for Persons with Disabilities (NCPWD). This Commission will spearhead the implementation of the Act. Ministries, Departments and Agencies (MDAs) of government have the immediate duty of reserving 5 per cent of their labour force for qualified persons with disabilities, in line with the Act. This will enrich our national labour force with the peculiar gifting of persons with disabilities….

“The Discrimination against Persons with Disabilities (Prohibition) Act has come to stay and to be implemented to the letter for the good of the generality of Nigerians. It is the reasonable expectation, therefore, that Nigerians would willingly comply with the provisions of this Act, considering the good things it holds for everyone.

“May it not take Court actions and Court Orders for this beautiful piece of legislation to be obeyed. Be that as it may, should litigation become an option, let it be undoubtedly clear that the Association of Lawyers with Disabilities in Nigeria (ALDIN) will not hesitate to rise up to the occasion.

Beyond the government, ALDIN also calls on private bodies as well as individuals to shone discrimination in all its shades and ramifications to make our society conducive for the well being, development and contributions of all person, irrespective of their disability status, in line with the spirit of and provisions of the Act.