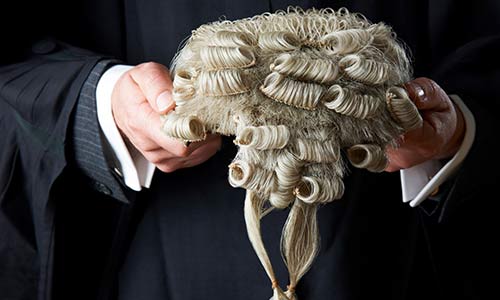 The small courtroom of Justice Ibrahim Buba, like every other courtroom of the Federal High Court, Lagos, is a very small affair which always has overspill of lawyers and litigants. On this particular day, March 18, 2013, the Power Holding Company of Nigeria had lived up to its name by “withholding” electricity and the giant generator serving the court complex had refused to work.

The resultant effect was that of scorching heat in the already overcrowded courtroom. The temperature inside was so high as to make hell itself green with envy!.

A tragicomic spectacle of lawyers fanning themselves furiously with improvised hand fans like file jackets, jotters and newspapers was a free drama to any observer peeping through the window.

Then as 9 am approached, the lawyers hurriedly began the ritual of donning their robes and putting on their wigs – a ritual that compounded the problem of acute discomfort of steaming heat borne of poor ventilation.

Upon entering the court, Justice Buba took in the sight and sighed. He gave an unusual concession, saying “You may all derobe (that is put off the wig and gown) this heat is too much” The lawyers chorused “As the court pleases” as they hurriedly slip off their robes and wigs – they were so relieved!.

This incident, which is by no means a rare occurrence in our courts, inspired in this writer a reflection on the continued relevance of the use of wigs and gowns in our courts.

Under the extant rule, no lawyer has the right of audience in our superior court of records unless you are “properly robed” which means you must array yourself in voluptuous gown and put on your head an awful grey wig whose provenance dated back to 17th Century. Wearing of wig and gown by barristers is a time-honoured British tradition dating back to the 1680s and we inherited it as part of the legacy of the common law civilisation.

I have never heard of any convincing reason why Nigeria legal system still encumbers itself with outdated paraphernalia called “wig and gown” One reason you often hear is that wearing of the attire is a time-honoured tradition, so what? What exactly is the significance of that?

Another argument is that the use of the wig and gown adds to the prestige of lawyers.

But I fail to see how mere clotting materials confer prestige on any profession in these modern times?

I don’t know what value being arrayed in voluminous gown is adding to the legal profession in practical terms.

Wig had been cast aside in the United States as far back as middle of 19th Century. Today American lawyer wear neither wig nor gown but only business suit.

In some commonwealth countries like Canada, South Africa, India, Pakistan, and Kenya, the judges and attorneys don’t wear wigs. Even in United Kingdom which gave the tradition to the world, there are a lot of reforms going on.

For example, as part of modern reforms, British judges in England and Wales have stopped wearing wigs in civil and family cases and they only now wear very simplified gown. It is only lawyers appearing in criminal courts who still continue to wear wigs and a black gown. Furthermore, since November 2011, lawyers appearing before the UK ‘s Supreme Court and the Judicial Committee of the Privy Council are no longer required to wear robes. So, the British people themselves are gradually casting aside the vaunted “time-honoured” wig and robes.

Here in Nigeria, people don’t robe before magistrates, does that make our magistrates’ courts less efficient in dispensing justice? The problem with us in this part of the world is that we are hardly capable of original thinking but take delight in sheepishly following other’s people’s ways of life. The culture that invented wig and gown is different from our own and the weather is different.

If at all our lawyers must wear anything by force why can’t we look inward and invent something like a light local fabric that would, in terms of consistency and sartorial design, reflect the peculiarities of our weather?

I have never seen a more pitiable sight that that of a learned Nigerian lawyer sweating profusely in sweltering heat while clad in the outdated wig and gown! Nothing more ridiculous!

Even if we are not motivated by cultural nationalism, we should at least cast aside the outmoded attire on the basis of pragmatism. There are many cases of lawyers who, having realised upon getting to the court that they had inadvertently left their wig and gown at home, would start running helter-skelter to borrow either from colleagues who have already done their cases or from vendors at the court premises for a token fee.

What prestige inheres in that?
If we decide to retain the wig and gown, we could at least banish it from our courts and make use of it only on ceremonious occasions like during the New Legal Year or during a valedictory session for a retiring judge etc. We should not allow ourselves to be further detained by holdover of the past.