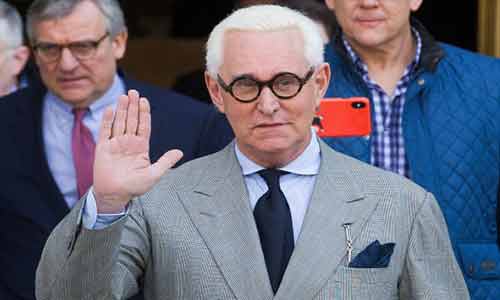 The stunning protest of four career prosecutors who withdrew from the Roger Stone case or resigned from government service will long be remembered as one of the most dramatic moments at the U.S. Justice Department in the tumultuous Trump era.

The prosecutors—Jonathan Kravis, Michael Marando, Adam Jed and Aaron Zelinsky—refused to sign onto maneuvering by U.S. Attorney General William Barr’s Justice Department to retract a sentencing memo that said Stone, a longtime ally of President Donald Trump, should face between seven and nine years for lying to Congress and other crimes.

The Justice Department on Tuesday called the government’s first sentencing recommendation “excessive” and filed a revised memorandum that said 37 to 46 months in prison “is more in line with the typical sentences” in obstruction cases. The original filing did “not accurately reflect the Department of Justice’s position on what would be a reasonable sentence in this matter,” John Crabb Jr., a career prosecutor and acting chief of the U.S. attorney office’s criminal division, said in the new memo.

The move came amid pressure from Trump, who had derided the Stone prosecution as “ridiculous,” and it undermined the arguments that Crabb’s four colleagues had made to the court. Kravis said he was resigning as an assistant U.S. attorney. Jed, Marando and Zelinsky withdrew from the Stone case.

As of Wednesday morning, Stone’s sentencing was still scheduled for Feb. 20 before U.S. District Judge Amy Berman Jackson, who has presided over various matters tied to the special counsel’s Russia and Trump investigations. Sentencing guidelines are advisory, not mandatory, and ultimately Jackson will have the final say on what prison term, if any, Stone receives. Stone, represented by a Fort Lauderdale-based defense team including Bruce Rogow and Robert Buschel, urged Jackson this week to consider a nonprison sentence. Both of the Stone sentencing memos carried the name of Timothy Shea, the newly installed U.S. attorney for the District of Columbia. Shea had previously served as counselor to Barr. He was picked to succeed Jessie Liu, the former Big Law partner who had been the Senate-confirmed leader of the U.S. attorney’s office and who had earlier overseen the Stone prosecution.

“Congratulations to Attorney General Bill Barr for taking charge of a case that was totally out of control and perhaps should not have even been brought,” Trump tweeted on Wednesday.

Trump on Tuesday pulled Liu’s nomination for a U.S. Treasury sanctions post. The Washington Post reported that critics of Liu, trained on her office’s handling of matters tied to the Robert Mueller investigation, lobbied Trump. The former Morrison & Foerster partner, who had served on Trump’s transition team, had been set to appear Thursday for her Senate confirmation hearing. Her nomination last year to a high-level leadership post at Main Justice stalled amid Republican opposition.

Here’s a roundup of some of the things lawyers are saying on social media and elsewhere about the abrupt departure of the four Stone prosecutors and the Barr Justice Department’s move to argue for a softer sentence for Stone:

>> Eric Holder, partner at Covington & Burling and former Obama-era U.S. attorney general: “AUSA’s Kravis and Zelinsky have shown more guts—and an adherence to the rule of law—than too many now serving in Washington. What Main DOJ is trying to do—and at whose behest?—is unprecedented, wrong and ultimately dangerous. DOJ independence is critical.” [Twitter]

>> Mary McCord, former acting assistant attorney general for the DOJ’s National Security Division: “There is no way you can come away from this with anything other than an impression that Justice is taking its orders from the president and pandering to the president. This is causing lasting and long-term damage to the department’s reputation and credibility.” [The Washington Post]

>> Tony West, chief legal officer at Uber and former Obama-era associate U.S. attorney general: “One of the greatest privileges of my life was to serve the American people as Associate Attorney General of the US, not least because of the amazingly courageous DOJ career attorneys who always put the independence and integrity of the US Justice Dept. first.” [Twitter]

>> Sally Yates, partner at King & Spalding and former Obama-era deputy U.S. attorney general: “To the career men and women of DOJ, you are both the backbone and the heart of the Department. Your noble dedication to the rule of law is the foundation of our republic.” [Twitter]

>> Preet Bharara, former Obama-era U.S. attorney for Manhattan: “The DOJ leadership seems bent on humiliating its own career prosecutors, sacrificing its independence, politicizing justice, and giving special treatment to the President’s criminal associates. The worst part is they don’t seem even to care anymore.” [Twitter]

>> Chuck Rosenberg, senior counsel at Crowell & Moring and former acting DEA administrator: “This signals to me that there has been a political infestation. And that is the single most dangerous thing that you can do to the Department of Justice.” [NBC News]

>> David Schulz, senior counsel at Ballard Spahr: “The pillars of our democracy are being pulled down around us.” [Twitter]

>> Paul Rosenzweig, resident senior fellow, national security and cyber, at R Street Institute: “Remember the name of John Crabb, Jr.  When others were called upon to do the wrong thing, they quit in protest. Crabb did not. He was under extreme pressure. Perhaps so … but that is when character matters most.” [Twitter]

>> Noah Feldman, professor at Harvard Law School: “None of this is normal. It’s not normal for the Justice Department to reverse a sentencing recommendation already submitted to court. It’s especially not normal when the decision follows the president tweeting that the sentence sought was too high. And it’s the trifecta of non-normalness when the person being sentenced was convicted of lying to protect the president in an investigation of whether the president colluded with a foreign power to get elected.” [Bloomberg]

>> Neal Katyal, partner at Hogan Lovells and former acting U.S. solicitor general: “I taught Kravis Criminal Law at Yale Law School almost 2 decades ago. One of the best students I ever had. Glad to see he has a conscience to match his intellect.” [Twitter]

>> David Laufman, former Justice Department lawyer: “A shocking, cram-down political intervention in the criminal justice process. We are now truly at a break-glass-in-case-of-fire moment for the Justice Dept.” [Twitter]

>> Ian Bassin, executive director of Protect Democracy and a former associate counsel in the Obama White House: “Jonathan Kravis and Aaron Zelinsky are upholding their oaths. The rest of DOJ should follow. This is a dangerous moment calling for more brave patriots.” [Twitter]