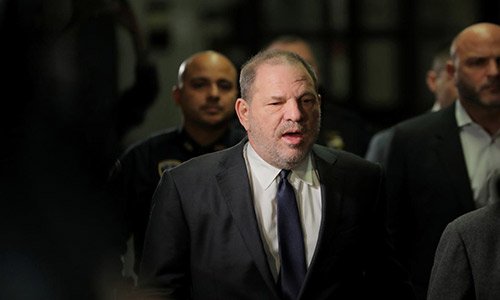 Weinstein — once one of the most powerful men in Hollywood — has pleaded not guilty to five charges of sexual assault relating to two women.

His trial is scheduled to start on January 6, 2020. He faces life in prison if convicted.

One of the women alleges Weinstein raped her in 2013, while the other claims he forcibly performed oral sex on her in 2006.

His lawyers had sought to prevent prosecutors from calling a third woman, who alleges that she was sexually assaulted by Weinstein over the winter of 1993-94, to give evidence.

The woman is not named in court documents but it widely understood to be Sciorra, 59.

She helped trigger the #MeToo movement in October 2017 when she told The New Yorker magazine that Weinstein raped her at her home in Manhattan in 1993.

Weinstein, 67, cannot be charged with raping Sciorra because the statute of limitations has expired. Prosecutors hope that her giving evidence as a corroborating witness will strengthen their case.

Weinstein has been accused of harassment and assault by more than 80 women, including stars such as Angelina Jolie and Ashley Judd.

The co-founder of Miramax and producer of “Pulp Fiction,” has always insisted his sexual relationships were consensual.