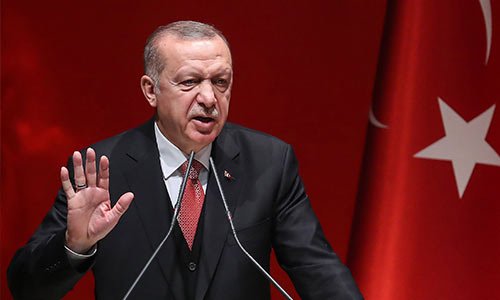 Turkey will “open the door” and send millions of Syrian refugees to Europe if its undergoing military operation in Syria’s north is qualified as an intrusion, President Recep Tayyip Erdogan warned on Thursday.

Turkey has launched its offensive in Syria’s north out of “love for the Syrian people” in order to protect them from Kurdish forces, seen as terrorists by Ankara, and the Islamic State (ISIS) terrorist group (banned in Russia), Erdogan said.

“In our country, we have 3.6 million Syrian refugees here.

“The European Union (EU), come to your senses, I’m saying this one more time. Don’t try to make this (Turkey’s military operation) look like an invasion. It’s not.

“If you try (to do) this, I will open the door, and I will send 3.6 million refugees to your countries,” Erdogan said in his address, as broadcast by TRT.

The simultaneous interpretation has been provided by the TRT.

Erdogan accused the European Union of never being sincere with Turkey.

Turkey launched a ground offensive in northern Syria on Wednesday, hours after its warplanes and artillery began hitting territory held by Kurdish-led forces.
Erdogan said the operation was to create a “safe zone” cleared of Kurdish militias which will also house Syrian refugees.

The unilateral decision has been widely condemned, with the European Union urging Turkey to end its offensive.

Kurdish-led forces who were key US allies vowed to resist.

The offensive was launched just days after President Donald Trump withdrew US troops from the border area, a decision that was criticised at home and abroad.

The Kurds – who helped defeat the IS group in Syria – guard thousands of IS fighters and their relatives in prisons and camps in areas under their control.

It is unclear whether they will continue to do so if battles break out.

In an earlier statement, US President Donald Trump – who had threatened to “obliterate” Turkey’s economy if it went “off-limits” – said that his country did not “endorse this attack”, calling the operation a “bad idea”.

UK Foreign Secretary Dominic Raab expressed “serious concerns” about the offensive, saying it “risks destabilising the region, exacerbating humanitarian suffering, and undermining the progress made against” IS.

“We call on the countries, the international community, to retreat their diplomatic embassies from Turkey,” Ahmed said at the European Parliament.