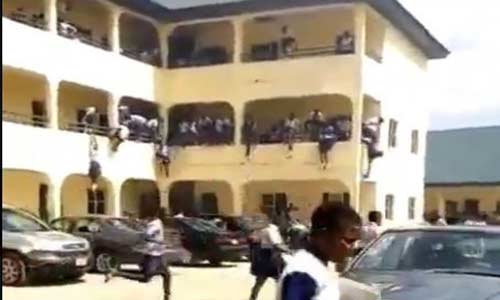 Many students were injured on Thursday at the Community Secondary School, Oroworukwo in Port Harcourt, the Rivers State capital, when an unidentified student allegedly opened a teargas canister in the classroom.

Some of the students, who were almost choked by the smoke from the canister, were seen in a video clip that has gone viral, jumping from the first floor of two storey building housing the secondary school.

It was learnt that the 17-year-old student in SS 2 got the teargas canister from the room of his late father who was a policeman.

The teargas canister was said to have exploded and the sound sent students jumping down from the first floor, while those at the top floor were seen in the video running for safety.

The incident, according to a source, happened in the morning and forced everybody out of the school premises for the entire day.

It was gathered that several students sustained various degrees of injuries as they frantically tried to escape from the two-storey classrooms block as smoke covered the entire floor.

An eyewitness, identified only as Nene, told our correspondent that some of the students, who jumped from the first floor in a fractured their bones.

Nene added that most of the victims were still hospitalised in a nearby private clinic.

She said, “An SS 2 male student opened a teargas canister in their classroom and out of fear; the students started jumping off the first floor. Many were injured and are still in Ana clinic, which is just close to the school. The hospital management had insisted that the parents of the injured students admitted in the hospital should pay their bills before they can discharge.”

Confirming the incident, the state Police Public Relations Officer, Nnamdi Omoni, told one of our correspondents that the Divisional Police Officer in charge of the area, informed him that an SS2 students brought a teargas canister to the school.

Omoni explained that the teargas canister was kept in a room by the student’s late father.

He said, “The boy and some of his classmates began to fiddle with the canister before it exploded while they were in the classroom. The boy has been arrested and investigation is ongoing.”

Omoni, however, dismissed the claim in some quarters that the incident was cult-related.

However, the Rivers State Commissioner of Police and the school authority are yet to release a statement with respect to the incident.

No life has been reportedly lost.