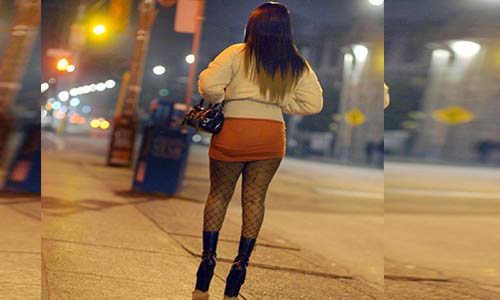 The media – Social media inclusive – has lately been awash with news of incidents of clampdown, harassment, arrest, “rape”, prosecution and ‘conviction’ of hundreds of women alleged to be prostitutes across the country. Between the nights of Wednesday, the 24th day of April, 2019 and Friday, the 26th day of April, 2019, officers of the Nigerian Police ransacked the entire streets, pubs and entertainment houses in the Capital Territory; arresting about “Sixty-five women…” in the FCT alone who, according to the FCT Police spokesman, Gajere Danjuma Tanimu, “were hanging around night clubs”.[1]

Sahara Reporters published statements from some of the women arrested during the incident in the FCT. In the words of one of the girls, “they picked us from Banex; when they picked us from Banex, they took us to Utako, but the police station was empty; there was no policeman inside, so they told us to pull off. When we pulled off, they started… some of us they used condoms, some of us they didn’t use.”[2] One other lady who alleged she was raped by policemen when she could not pay the money they demanded in exchange for her release narrated: “I was held down by three policemen while one of them raped me; he didn’t wear a condom. We were three in all that were raped by the same policemen. The three of us were all brought out of the van and raped by the policemen because we had no money to give them. We were raped behind the National War College. The other girls were also raped by two others; one of them used a pure water sachet as condom but the other one did not.”[3]

Further news reports alleged that some of the ladies arrested were “convicted” by an Abuja Mobile Court “for alleged prostitution”.[4]

“No effort was made to determine the identity of those accused of soliciting. On the streets, in gardens, in “joints”, in nightclubs and lounges, these women and girls were accosted and whisked away, protesting their innocence. I read the heartrending story of a distraught couple who kept screaming “We are married! See our rings!” as the woman was being dragged away. Mercifully, the man refused to let go of his spouse and the “law enforcers” eventually left them, bruised but relieved, to search for more “prostitutes” to throw into their buses.”[5]

In another operation, the State Security Service, which goes by the alias ‘Department of State Security’ (DSS), on Saturday, the 4th of May, 2019, through the Director of its Cross-River State Command, disclosed the Agency’s clampdown and arrest of Fifty-nine commercial sex workers in Calabar in the wee hours of that day.

Considering the nature of the statutory duties of the DSS, one would think the Agency was merely having a spare time relishing on the ease that comes with menial duties – as against its obviously tough job – in the absence of, or having exhaustively dispensed with all national security issues for which it was commissioned. It is however surprising that amidst serious national security challenges – killing of thousands of Nigerian citizens and the displacement of communities, the priority of the Nigerian Police and the DSS is enforcing against prostitution.

Section 2(3) of the National Security Agencies Act, 1986 (which is the principal Act that established the DSS) clearly states the responsibility of the SSS; to wit, prevention and detection within Nigeria of any crime against the internal security of Nigeria; the protection and preservation of all non-military classified matters concerning the internal security of Nigeria; and such other responsibilities affecting internal security within Nigeria as the National Assembly or the President, as the case may be, may deem necessary. It is obvious that by the provisions of the Statute, the duty of the DSS is restricted to issues of national security.

On the part of the Police, Section 4 of the Police Act, CAP P19 LFN, 2010, saddles the Force with general duties of “…prevention and detection of crime, the apprehension of offenders, the preservation of law and order, the protection of life and property and the due enforcement of all laws and regulations with which they are directly charged…”, including the performance of “such military duties within or outside Nigeria as may be required of them …”

Thus, assuming, but not conceding that the several women arrested, detained and prosecuted by the Police and the DSS were indeed prostitutes – We believe they are not –, the questions that would therefore arise are: What is the legal implication of the arrest, prosecution and ‘conviction’ of persons for alleged engagement in prostitution? Is prostitution a punishable offence under the Nigerian law?

Section 36 (12) of the Constitution FRN 1999 (as amended) provides that “…a person shall not be convicted of a criminal offence unless that offence is defined and the penalty therefore is prescribed in a written law, and in this subsection, a written law refers to an Act of the National Assembly or a Law of a State, any subsidiary legislation or instrument under the provisions of a law”.

Subsection (8) of the same Section directs that “No person shall be held to be guilty of a criminal offence on account of any act or omission that did not, at the time it took place, constitute such an offence, and no penalty shall be imposed for any criminal offence heavier than the penalty in force at the time the offence was committed”.

In the whole of Nigeria, there is no written law which forbids or penalizes prostitution. Prostitution is merely an issue of morals, and no matter how much any culture, religion or morals may forbid or frowned at it, it can never wear the face of law. To the religious, prostitution may be sin; to the traditionalist, it may be a taboo or an abomination; and to the morally upright it may be serious depravity; none of these attributes can by any means, otherwise make it an offence. This is because, crime is not created by morals or religious beliefs. And just as night is different from day, law is different from morals; and must at all times be eschewed from morality.

Undoubtedly, the Christian religion, as well as the Islamic religion – which are the prevalent religions in Nigeria – forbid sexual immorality, debauchery and profligacy of all sorts. However, Nigeria is a circular State guided by statute and not religious injunctions. Section 10 of the Constitution FRN 1999 (as amended) guarantees against the adoption of any religion as State Religion, either by the Government of the Federation or of a State.

Over the years, Islamic scholars have evolved core religious injunctions enshrined in the Quran and Hadith into codes known as the Sharia law.[6] In Northern Nigeria where Islam is prevalent, Sharia law has been in operation for many years; and until 2000, its scope was limited to personal status and civil law.[7] From the year 2000 till date however, twelve States have added criminal law to the jurisdiction of the Sharia Courts amidst controversies and serious human rights concerns.[8]

It is imperative to underscore that by the Sharia Court Laws of the Northern States, the Sharia Judicial System confers original jurisdiction in all civil and criminal matters in Sharia Courts. Thus, the Court would have jurisdiction to hear and determine civil matters and Causes where all the parties are Muslims.[9] In civil cases, where one of the parties is a non-Muslim, no jurisdiction is to be exercised unless he gives a written consent.[10] In criminal cases however, the jurisdiction of the Court is limited to only Muslims in the circumstance the accused persons are jointly Muslims and non-Muslims.[11]

The present author opines, therefore, that having regard to the fact that the Sharia law – which is binding only on non-Muslims – is the only ‘penal law’ that forbids and penalizes prostitution in

Nigeria, it follows that non-Muslims Nigerians cannot be liable for the ‘offence of prostitution’.

The corollary is that no non-Muslim Nigerian citizen can be lawfully arrested, prosecuted and convicted for the offence of prostitution. To do so would amount to a brazen disobedience and affront on the Constitution, from which all authorities and persons – including all Government – draw their existence, authority and validity.

It is noteworthy also that the provisions of Section 36 (12) of the Constitution which forbids the conviction of a person of any criminal offence not defined with the penalty prescribed by a written law made by the National Assembly or State House of Assembly, comes as part of the fundamental human rights guaranteed all Nigerian citizens in the Constitution.

On the overall, since prostitution is not prescribed as an offence under any written law against nonMuslims in Nigeria, any indiscriminate arrest, prosecution and purported conviction of persons would not only be illegal and unlawful; it would also amount to a nullity. One therefore wonders under what law the alleged Abuja prostitutes were arraigned, prosecuted and sentenced to jail term of one Month before the purported ‘Abuja Mobile Court’. It is hoped that future opportunities would arise when superior Courts of record may finally pronounce on the legality or otherwise of such arrest, prosecution and conviction.

[1] Sahara Reporters, ‘Arrested Abuja Prostitutes Narrate How They were Raped By Policemen Who Wore ‘Pure Water Sachets’ as Condoms’ 2nd May, 2019, <http://saharareporters.com/2019/05/02/arrestedabuja-‘prostitutes’-narrate-how-they-were-raped-policemen-who-wore-‘pure-water> Accessed Thursday, 9th May, 2019.

[9] Abdullateef Kamaldeen, ‘An Overview Of The Jurisdiction Of Sharia Courts’