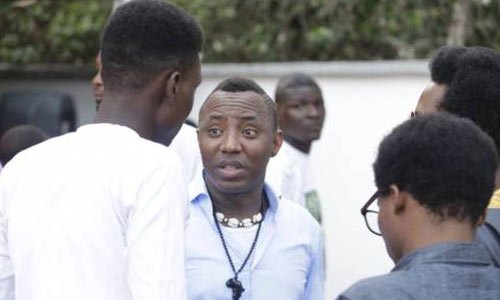 In yet another ridiculous twist, the Department of State Services on Tuesday said that it was yet to release pro-democracy campaigner and Publisher of Sahara Reporters, Omoyele Sowore, from its detention facility in Abuja because it doesn’t want him to get knocked down by a vehicle on his way out.

Spokesperson for the agency, Peter Afunanya, also told journalists in Abuja on Tuesday that Sowore’s lawyer, Femi Falana (SAN), was yet to come fetch him from their facility.

Afunanya said, “We cannot just release Sowore and ask him to go because he may be knocked down by a vehicle at the gate.”

Afunanya noted that Falana had not been to the headquarters of the service since the activist was granted bail, a claim the popular rights lawyer vehemently rejects.

Afunanya claimed that the DSS was following administrative procedures by asking the sureties to come forward for proper documentation.

He said, “We respect rules and orders of the court and there was never a time the Director-General said he would not release Sowore.”

The secret police continues to hold on to Sowore despite two court orders directing it to release him after meeting bail conditions on both occasions.

“I confirm that I have an official relationship with the DG of SSS. But since the commencement of the case of Sowore and Bakare the DG has refused to pick my calls while I have since become a persona non grata in the office of the SSS,” Falana said.

Sowore was arrested in Lagos on August 3, 2019 for calling on Nigerians to take to the streets in peaceful demonstrations to demand a better country from President Muhammadu Buhari’s administration.