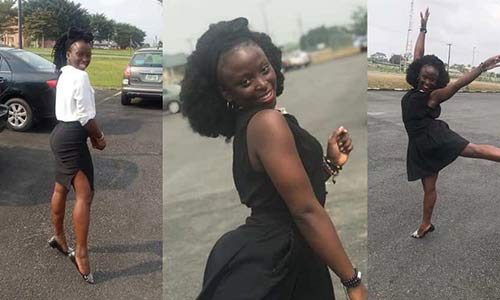 … Friends of the late Miss Maltida fondly remember her as a multi-talented nature -hairstylist, ballet dancer, model, and singer.
… Family Calls on Rivers, Bayelsa government and security agencies Government to assist in tracking the killers.

Madam Tari Itonyo, mother of the late Miss Matilda Itonyo, the final year female law student of the Rivers State University who was stabbed to death in the early hours of Tuesday, December 10, in her apartment, Eagle lsland area of Port Harcourt is crying for justice.

She said Matilda Itonyo described her only Hope. She said since she learnt of the gruesome manner her daughter was stabbed to death, she has been in shock.

The 24-year old Matilda Itonyo Mark who was brutally stabbed to death by yet to be identified persons inside her off-campus apartment close to Eagle Island part of Port Harcourt was fondly described by her friends and school mates as multi-talented.

She appealed to security agencies to track down the murderers of her daughter and bring them to face justice.

The mother who managed to speak in between sobs said: “I just want justice. Just look at me. The girl has struggled… struggled to a final year for Law. My Hope…My Future. Part of my flesh and blood is going out me. My tomorrow’s Glory is going down l need justice. l need…justice, l need…l need justice l can’t bear it. Matilda is somebody everybody wants to be a mother to.

Matilda is somebody everybody is saying how I wish l have Baby like this one. How can they cut down the life of my daughter like this? I need the Government to help me. I need justice.”

Also, the Father, Ebikili ltonyo, also asked Bayelsa State Government where they hail from, and the Rivers State government to assist in arresting the murderers of his daughter.

“My daughter struggled to make it and somebody will just come to take her life like that. It’s a very painful thing. l don’t even know what to do. Let the Government come to my aid. People of
Nigeria… People of Bayelsa, people of Rivers State please come to my aid to get the killers of my daughter.”

The late Maltida’s friends in their mournful mood fondly described her thus: “She is a very good hairstylist, a creative Ballard dancer, model, and budding singer. Maltida is somebody who cannot fight for herself. She is always giving you hope. She tried to make People’s hair just to make money and pay for her school fees”.

Matilda’s body was found in a pool of blood in the early hours of Tuesday, December 10 by her bosom friend who called the Police.

Rivers Police Command has said that the Commissioner of Police, CP Mustapha Dandaura, has ordered a full-scale investigation into the circumstances surrounding the killing of Matilda.

The Police Public Relations Officer, DSP Nnamdi Omoni, PPRO, appealed to neighbours and concerned individuals who have useful information concerning the death of Matilda to give them to the Police to facilitate the arrest of the killers.

COVID-19: We ‘re In Negotiation With Vaccine Manufacturers For Supply –...