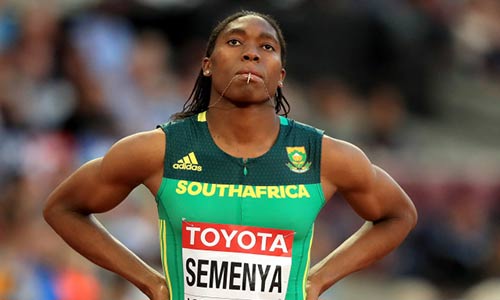 Switzerland’s top court has rejected an IAAF request to re-impose rules obliging double Olympic champion Caster Semenya to lower her testosterone before competing in certain events, a statement from her legal team said on Thursday.

“The Federal Supreme Court of Switzerland has rejected the IAAF’s urgent request to be allowed to immediately re-impose its eligibility regulations on Caster Semenya,” the statement said.

The court, which could not be immediately reached for confirmation, had issued the order on Wednesday, it said, adding that “this means that Caster remains permitted to compete without restriction in the female category at this time.”

The IAAF had earlier this month opposed a ruling by the court temporarily suspending the federation’s rules following an appeal by Semenya, the South African who won the women’s 800 metres at the 2012 and 2016 Olympics.

The athlete was contesting a decision by the Court of Arbitration for Sport which previously found that the rules were “discriminatory” but “necessary” to ensure fairness in women’s athletics.

The rules require women with higher than normal male hormone levels, a condition known as hyperandrogenism, to artificially lower the amount of testosterone in their bodies if they are to compete in races over distances of 400m to the mile.

Wednesday’s court decision means that the IAAF and Athletics South Africa now have until June 25 to make a new court submission on Semenya’s request that the IAAF rules remain suspended throughout the entire appeal proceedings, the statement said.

“No woman should be subjected to these rules,” the South African athlete said in the statement, adding that she had “thought hard about not running the 800m in solidarity unless all women can run free. But I will run now to show the IAAF that they cannot drug us.”

She also expressed frustration that she has been prevented from competing in the 800 metres at the IAAF Diamond League Meeting in Rabat on June 16, in what her legal team said was an apparent violation of the Swiss Supreme Court’s order.

According to the statement, she had been notified on Monday that the head of the Moroccan Athletics Federation had denied her participation in the event.

“Caster is currently seeking clarity on the specific reasons for that decision, and she urges the IAAF to ensure its member federations comply with the law and the Supreme Court’s orders,” it said.

Semenya remained focused on defending her Diamond League 800-metre title, it said, adding that she had sought entry at the Prefontaine Classic event in the United States on June 30.

The athlete dismissed IAAF’s claim that it is committed to the full participation of women in sport.

“I am a woman, but the IAAF has again tried to stop me from running the way I was born,” she said in the statement, pointing out that the hormonal drugs she had been required to take to compete had made her feel “constantly sick and unable to focus for many years.”

“No other woman should be forced to go through this,” she said.