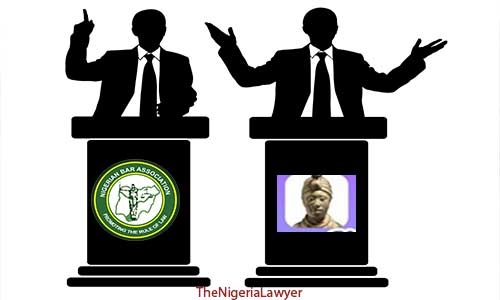 It is that time again when the news sphere is awashed with horse-trading and permutations towards the occupation of the exalted Office of President Nigerian Bar Association and other juicy positions. The contest for 2020, unlike the 2018 contest, began with a little or no fireworks until the news broke of Ajibade, SAN pulling out of what has turned out to be an arrangement or arrangee government as the late Fela Anikulapo would have called it.

In the buildup to the 2018 contest which heralded the birth of universal suffrage in the Nigerian Bar Association, contestants were seen right from 2017 Annual General Conference or even before to be in for a serious business. From reservations of hotel and flights to various evening sitouts and hangouts to various clubbing and parley, contestants were already doling out money and continuously oiling the wheels of the media outfits especially the legal Blogs.

Fireworks across all social media platforms became a regular sight as the supporters of the three leading candidates were always going for the kill with propaganda, pictures and memes to drive home their fanaticism.

Back to the current state of affairs, it is nothing compared to 2018 as no one could have guessed who the leading contenders were during the Annual General Conference. Apart from the Egbe Amofin meeting convened by Chief Wole Olanipekun a former President of NBA, there was hardly any other gathering aimed at preparing for the elections.

It is important to state that it was obvious at the meeting held at Lagos by Egbe under the leadership of Olanipekun, SAN that Egbe was working assiduously towards an answer and the latest twist in event can only lead credence to the insinuations though a revered Senior Advocate of yoruba extraction was very vocal and declared there and then that the purpose of the meeting was to adopt the anointed candidate who happened to be related to one of the said leaders by marriage.

The withdrawal of Ajibade, SAN is not a surprise to me and eventhough I’m still awaiting an opportunity to meet the fine gentleman, l think he is bold enough to ruffle some ancient feathers. At least he who dares, wins.

My commentary is not about who is qualified or not to contest but about Egbe Amofin that has become a vehicle that is only useful every two years when the elections are coming and the interest at stake at that point will decide who restarts the vehicle engine.

A few questions comes to mind and they are;

Egbe is a veritable tool for the development of yoruba nation but we have relegated it to an association that convenes to endorse candidates for elections and it is such a pity.

Ajibade, SAN by his action is bringing to the fore the hypocrisy of Egbe Amofin by not participating in the selection process that ended up as an electoral college of Branch Chairmen deciding for over a hundred thousand yoruba lawyers.

Egbe Amofin should seize the opportunity to address the fundamental purpose of the group to reposition it or scrap it all together as it seemed to have out lived its usefulness.

A strong willed Committee of selfless yoruba lawyers who are not overtly interested in any of the candidates should come together to replace the present partisan leaders and ensure that yoruba lawyers reclaim their position in the general body of the NBA. Like Ajibade more lawyers should rise to challenge the status quo with the intention to make Egbe a viable tool for the development of Yoruba Nation and Nigeria as a whole.

I hope that l will meet Babatunde Ajibade, SAN soon and tell him how much he has challenged me to write my other letters with my name boldly written on them.

Till then, my pen name is The Weeping Ink and l write from Osogbo, Nigeria.